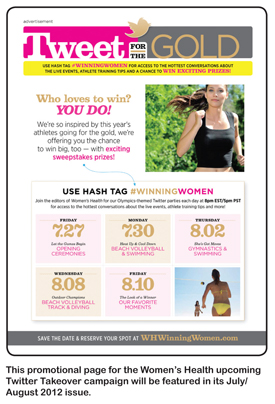 At Rodale’s Women’s Health, social media is an intrinsic part of the magazine’s culture. Publisher Laura Frerer-Schmidt recalls that when she first joined the publication 10 months ago, WH’s Twitter feed had about 500,000 followers. At time of print, the magazine was less than 3,000 away from one million followers.

In a move to further integrate social with print, drive deeper consumer engagement and increase ad dollars, Women’s Health approached existing advertising partner Procter & Gamble about an expanded campaign. The magazine has been covering the London-bound Olympic games for months, and P&G already assigned an Olympic spokesperson to many of its brands (Pantene tapped swimmer Natalie Coughlin as its rep; COVERGIRL has boxer Marlen Esparza and beach volleyball player Jennifer Kessy).

Frerer-Schmidt took note of the parallel coverage. “We’re doing a feature in-book in our July/August issue called ‘Look of a Winner’ about the athletes’ motivation, style and daily lives. We’re going to incorporate hashtags throughout the copy,” she says. “We went to P&G about possibly participating in this story.”

The campaign, dubbed Women’s Health Twitter Takeover, will culminate during the Olympic games, running from July 27 to August 12. An Olympic Center will go live on WomensHealthMag.com on June 1, which will connect to a custom P&G dashboard. Here, consumers can participate in a live Twitter chat with WH editors on assigned nights throughout the Games. The site will also include additional content (articles, videos, etc.) from the editorial team’s eight-month coverage. There will also be polls, sweepstakes and giveaways of P&G products.

“The interaction with our consumers and our brand adds to the print experience; it brings a level of intimacy. We have an inside track with the Olympics and the athletes, and we wanted to let readers take advantage of it,” says Frerer-Schmidt.

Readers are also able to participate in the live chats through their own Twitter page by following the WH hashtag and including the magazine’s Twitter handle when they comment.

P&G advertising will wrap the “Look of a Winner” section, which will include 7 ad pages in the 15-page feature. Participating brands include Pantene, COVERGIRL, Olay, Tampax, Venus, Secret and Clairol. A special table of contents for the feature doubles as a P&G promo page. Previously, P&G only ran one page in-book; it’s now Women’s Health’s number-one advertising partner.

The Olympic editorial/social integration looks to be the first of many of this type of program for Women’s Health. “We wanted to integrate social and print even further. They already are to some degree, but we have not hashtagged an entire article before; nor built a presence that speaks to those hashtags. Moving forward, you will see more and more of this kind of integration, where print speaks to Twitter, and Twitter speaks to print,” says Frerer-Schmidt.