Will the Deal Drought Continue?
A challenging time for magazine M&A. 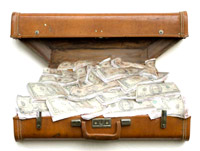 During a recent FOLIO: magazine finance Webinar, DeSilva
+ Phillips managing partner Reed Phillips said that he remains concerned about
the credit market and doesn’t see leverage multiples for debt financing
improving over the next several months.

"There are far fewer lending sources that are active now
than there were a year ago," Phillips said. "That means, in terms of supply and
demand, they can charge more and they can be tougher on terms. A year ago, borrowers
were really in control and could dictate terms and it really got out of hand. Now,
it’s completely reversed. The folks who are lending the money, and the
financial institutions, have the upper hand, and therefore it’s harder to
borrow."

Phillips said that, on average, leverage multiples in the
spring of 2007 were about 6.5x EBITDA. This summer, those multiples are more
like 4.5x EBITDA.

"I think that’s absolutely going to continue through the end of this year and
into early next year," said Phillips. "I just hope that it isn’t much longer
than that. But, I’m not yet convinced that it won’t be longer."

Indeed, even this summer we’ve seen magazine deals buckle
under the pressure from the collapse of the sub-prime mortgage market and the
shaky credit market. Last month, the sale of Entrepreneur magazine publisher
Entrepreneur Media to Texas-based Arlington Capital for a reported $200 million
fell apart because,
according to CEO Peter Shea, "the debt market has made it a very
difficult market for [buyout] funds to raise debt financing at a reasonable
multiple and percentage rate."

Does this mean that other
big magazine deals also won’t get done? Not necessarily, but it sure makes
the process a lot more challenging.