Who Cares How Much GQ’s iPhone App Made?
Let's see how the engagement and behavior metrics shake out. 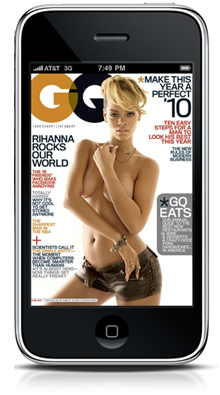 Rather, publishers should be knocking on Charles Townsend’s door with a list of questions about who those downloaders are and what, exactly, their behavior and engagement metrics are like. How many articles were read, how did they swipe and pinch their way to that article, how many jumped from an ad or story directly to a product and bought it?

Yes, 18,000 readers at sub-$40,000 is chump change when held up against the print magazine’s distribution and ad sales. But we’re two months into wondering how readers are going to interact with a full-text and image magazine squeezed onto a device with a 3.5-inch screen with, I’m guessing, fairly minimal marketing muscle behind it. Let’s see how that goes first. 18,000 people is a pretty good-sized focus group.

I like Condé’s move. They went all-in, offering the full magazine. No half-step, incremental, bite-sized experiments. GQ is a strong brand and Condé put that strength to the test by seeing how it holds up and translates to a mobile environment.

A spokesperson at Condé Nast told me readers spent an average of 83 minutes with their iPhone GQ. That’s a pretty long time.

There’s been a lot of discussion about whether publishers are missing the point by trying to shoe-horn a print product carbon-copy, and its business model, into a mobile context. But let’s use the GQ experiment, and any others like it, as the control and first see if it has legs on the small screen. Let’s understand how readers interact with the functionality. Let’s see how many ultimately download it, if it’s worthwhile to market it, how users interact with it after they get it. Then, beyond the initial $2.99 sale, let’s look at how else to monetize it if the audience density is there.

Condé Nast chose the proprietary route and built, along with Adobe, their own reader app for the iPhone. But I’d also like to see the digital edition providers, like Zinio and Nxtbook, that are developing platform-neutral access to digital editions pile on with their app and mobile device usage metrics too.

UPDATE: Nxtbook Media‘s Marcus Grimm has offered up some interesting stats of his own, and rightly questions Conde’s method of acheiving that 83-minute average. Is that stat survey-sourced or from actual metrics? In the meantime, Grimm notes that, for mobile device Nxtbook readers, the iPhone has the highest time-spent metric with a more down-to-earth 3.5 minutes. Blackberry readers were next at just over 2.5 minutes. For a full breakdown, read Grimm’s post here.

UPDATE 2: A Conde Nast spokesperson said the 83 minutes was lifted from actual app metrics, it’s not the result of a user survey: "[The metric] comes from the analytics package built into the app. In other words, it is a metric that comes from real-world app use and our measurement of it."