What’s in a Name?
That which we call a media company by any other name would smell as sweet. 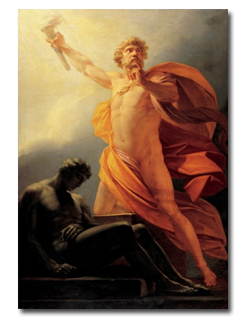 First came news that The Hollywood Reporter was transitioning from a weekday trade paper into a glossy weekly, and that former Us Weekly editor Janice Min was taking over as editorial director. Then, earlier this month, Beckman landed another big hire in Newser founder and Vanity Fair columnist Michael Wolff as editorial director of e5’s AdweekMedia group.

Now, the next big thing on tap is a name change. According to a memo sent to staffers, e5 Global Media is being renamed as Prometheus Global Media, a name Beckman says “carries more weight and gravitas in the marketplace.” A new corporate Web site, PrometheusGM.com, also is in the works.

A new name makes sense. Since the big acquisition last year—the company is backed by Pluribus Capital Management and financial services firm Guggenheim Partners—e5 has been working on a plan not only to create a corporate infrastructure that’s separate from Nielsen’s (its offices are still in the Nielsen building at 770 Broadway in New York City, many employees still have a Nielsen e-mail, etc.) but to start from scratch, in a sense, to revitalize a portfolio of well-regarded, if not tired media brands.

As one knowledgeable source told me: “Come on, these brands cover music and Hollywood. They need some sexing up.” That same source says the new name is being greeted internally as a welcomed change that helps show that the company is “united and moving forward.”

What Beckman’s memo is missing, however, is an explanation of the meaning behind the new name. Prometheus, of course, was the Greek mythological character who was credited with stealing fire from Zeus and giving it to men. Zeus then punished Prometheus and had him bound to a rock where an eagle would eat out his liver (which would subsequently grow back) each day for eternity.

How that relates to media … ?

Then again, what did e5 stand for? I’m not sure that we ever got an explanation about that one, either. (While I’m at it, what the heck does "Red 7 Media," the name of FOLIO:’s parent company, mean? We actually explain it here.)

Some media observers took to Twitter to poke fun at the new name. “Better than Sisyphus Global Media, I suppose,” read one tweet. “Pretentious Global Media is what I’ll call it,” says another.

To a degree, I’m reminded of Cygnus Business Media, which announced a new corporate architecture this summer around four affinity groups. Associated with the changes, Cygnus also unveiled a new logo and tagline: “Because the world is changing very fast.” FOLIO: readers had some things to say about that. See some comments here, and here.