What a Turkey Can Tell You
Magazines share lessons from some of their poorest-selling covers of past years.

When a magazine tanks on the newsstands the reasons are usually obvious.

Number one: Did you give your audience what they want? My first bomb was an issue of New York Magazine with a great story about international spying. All good stuff except the New York audience wanted service such as food reviews and shopping tips. “The Best Chinese Food in New York “ was that year’s best-seller.

Number two: Who are your icons? A slick business magazine in Boston thought they hit the jackpot when they ran a celebrity,  Ben Affleck, on the cover. The problem was that Affleck meant nothing to that magazine’s audience. They wanted Bill Gates and Steve Jobs. The issue tanked.

Number three: Is the language clear? Another business magazine (now defunct) got into the habit of using one-word headlines on the cover. Headlines like  “War!”, “Success!”, “Shame!” were supposed to carry the cover. The editor’s reasoning? “[The newsstand buyers] will open the magazine and see what it’s about and buy the magazine.” The problem was that there was no reason to open the magazine.

Some forces, unfortunately, are beyond us lowly editorial types’ control. A few years ago I got an angry call from a home improvement magazine in the Midwest that I had been advising. I spent the next few hours going over and over my check list and everything seem to point to a good cover. It had a number of useful cover lines, an image of something that everybody wanted to make, buzz words like “from A to Z” and “handbook.”

That afternoon I found myself at LaGuardia Airport and went directly to the first big newsstand. The magazine had always been by the cash register but it was nowhere to be found. When I asked the counterman for the magazine he said “It’s in the back. They’ve stopped paying for being next to the register and I’m not going to take them out of the boxes.”

JC Suares has worked as a creative consultant for more than 100 magazines in the U.S. and Canada over the past 10 years.

There were two standout loser issues from 2010: May and November. They are especially notable failures since both are astronomy-themed covers, and astronomy is a fairly reliable cover subject for us.

The May cover suffered (in retrospect) from a major lack of surprise. The image is a photo of the moon, colorized in a slightly unusual way but otherwise looking exactly like…the moon. And the cover line (“THE NEW MOON”) didn’t promise anything specific enough to draw readers in, evidently. The robotics package had some powerful reporting, but the related cover lines were nearly invisible. One lesson I take from this: Do NOT give feedback on a cover based on PDFs viewed on your phone (I was out of the office at the time, giving feedback on the fly).

Incidentally, our miserable experience with the May 2010 cover did not prevent Astronomy from using the same image (sans colorizing) on their March 2011 cover, albeit with a much more aggressive main cover line.

The other big loser was the November cover. This was a deliberately conservative cover, a visual riff on a best-selling cover from 2004. Lightning did not strike twice, however. Likely problems: Fatigue with the whole “life in space” theme (our last two “origin of life”-related covers also underperformed), a slightly soft and confusing main image, and no strong secondary lines. A pessimistic skyline (“Modern Medicine’s Failing Grade”) probably didn’t help. 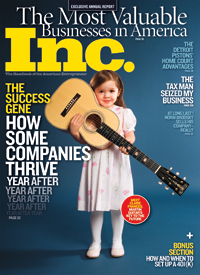 At the time, putting little Claire Frances Martin on the cover seemed a
perfect fit for the cover line and the inside feature on
multi-generation family businesses, one of which was Martin Guitar. No
Inc. reader identifies with a child, and the headline “The Success Gene”
suggests that if you’re not born with what it takes to be a successful
entrepreneur, you might as well hang it up. It generated a 24 percent
sell-through, versus our best-sellers which are in the mid-40 percent
range. 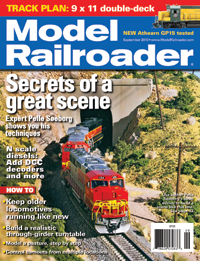 It had all the right elements: a cover story written by a
reader-favorite author, a good mix of cover lines and a red Santa Fe
Rwy. locomotive, perhaps the most popular icon of model railroading.

However, it sold fewer single copies than the September 2009 issue. The
cover image may have done its job too well. When we publish photos of
model scenes that appear so realistic a reader gets confused, as we did
on the cover of the September issue, we can lose our audience. 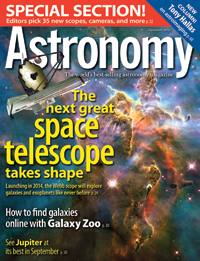 This cover was the poorest of the year for 2010. On first blush it’s difficult to say why, as the Webb Space Telescope, the major story, is the next generation Hubble and ought to have been a hot topic. It’s possible that our readers, who are so hungry for science results, simply don’t care too much to read about such a mission before it launches or produces any science.

WEIDER HISTORY GROUP [all titles below] 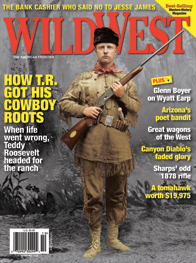 Here’s a magazine that you have to work at to get a sell-through below 50 percent at Barnes & Noble, but somehow we managed to do it with an important icon—Theodore Roosevelt. Teddy was a New York high society politician with a promising career when both his mother and his wife died within 11 hours of each other. Roosevelt was so depressed he quit his life, packed up and headed to Dakota Territory. He bought a ranch, became a cowboy and got good with guns.  This amazing story of recovery and redemption was only bested, in my mind, by this amazing and obscure photo of Teddy in his buckskins we found at Harvard where Roosevelt had studied as a boy. But to Wild West fans, the photo and storyline weren’t enough. They voted with their pocketbooks—giving the magazine an all-time low sell-through of 37 percent. Maybe Teddy just doesn’t look enough like most peoples’ mental image of him to connect.  Or maybe it’s the brown tones—brown covers rarely sell well, I’ve discovered. 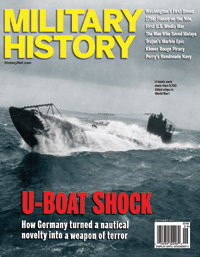 Military History has sell-through at Barnes & Noble of 48 percent to 65 percent. I thought this cover had everything going for it—submarine, action, mood. But we didn’t do a good job of communicating the big idea behind the story—that Germany completely changed war at sea and threw navies everywhere off balance by perfecting a 70-year-old idea that had never worked well—the U boat. Sell-through on this cover was a five-year low of 40 percent. 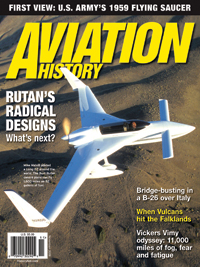 Aviation History’s sell-through at Barnes & Noble has hovered at 48-52 percent for nearly three years since we figured out a winning formula: World War II era fighter; photo, not illustration; aircraft coming towards you, preferably nose slightly down.

For this cover we were too proud of having gotten to the reclusive Burt Rutan. What were we thinking? It was a huge failure—30 percent sell-through. The next issue we put a classic World War II fighter on the cover and shot up to 49 percent.