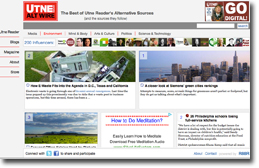 Utne Reader, a magazine that highlights the best of independent and alternative presses, has launched Alt Wire, a socially curated digital magazine.

Using the R88R platform by Sociative Inc., Utne Reader staff selected a group of twenty core “influencers” to help determine the articles that will appear in Alt Wire. Influencers include past “visionaries”, individuals who were featured in Utne Reader’s annual “Visionary” issue, as well as those recognized in Utne’s Independent Press Awards. After compiling a list of possible names, editorial staff honed a group of influencers prominent in media, environment, mind & body, arts & culture, politics and science & technology categories.

After this group was assembled, Utne Reader worked with Sociative to create an algorithm that pulls in sources the chosen influencers are themselves influenced by, and others they influence (which translates to those retweeting or commenting on influencers’ postings on Twitter).

This initial group is constantly fluctuating, according to Alt Wire web editor David Doody, as it reflects the cycle of content and conversation on the web, “Certain information is deemed important by the algorithm, because of how many times it’s being focused on by other people who have been named influencers, and this is how an influencer rises in the chain of things. The group keeps moving and growing; people will be added and will fall off.”

An initial estimate of those who “influence” the content posted on Alt Wire falls somewhere around the 3,000 mark.

Each article featured on Alt Wire shows how many times it’s been retweeted, and which influencers are sharing the selected content. Doody says that while it is likely articles from major sources such as The New York Times and The New Yorker will appear in Alt Wire, the majority of content shared will be born of the alternative press realm, from sites like Mother Jones and The Nation.

Alt Wire is intended as a complement to Utne Reader, its website, social media presence and corresponding blogs. “We don’t editorialize in our content. If we write about something, we’re attempting to shine the light on another alternative source,” says Doody, “It’s an extension of our mission to show what’s happening with the alternative press and to share stories that would otherwise be missed.”