U.S. online ad spending is set to eclipse that of print this year by 15.5 percent, according to eMarketer, suggesting that the long-awaited print-to-digital inflection point may now be here for both content creators and marketers.

This year’s print magazine ad spending is estimated at $15.4 billion, compared to $19.4 billion for newspapers, putting the combined print total at $33.8 billion, versus an online sum of $39.5 billion. In 2011, print advertising led digital by $4 billion, with a $36 billion total for print besting $32 billion online. The 2012 numbers reflect a 23.3 percent year-on-year increase in digital ad dollars, while print fell 6.1 percent during the same period.

eMarketer also predicts online ad spending to reach $62 billion by 2016, while print advertising will remain relatively flat, with a total at $32.3 billion that year—$15.3 billion of which deriving from print magazines.

Double-digit growth in online ad spending is expected to continue through 2014, when the total will reach $52.8 billion. 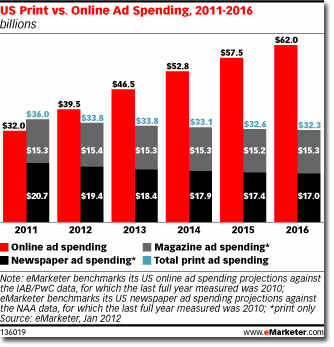