Understanding Link Journalism
How small publishers can be the "be-all" in their market. 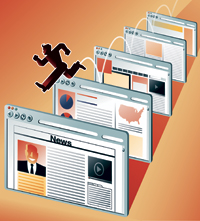 “Link journalism,” a term coined by Scott Karp, formerly director of digital strategy at Atlantic Media and founder of journalist social network Publish2, refers to sharing and picking up links from other media outlets and bloggers in order to fully cover the story.

It’s the antithesis of the traditional media approach, in which a media outlet was expected to offer its own version of a story (even if that version provides little else from stories already out there). On the Web, however, content ownership is a much looser idea. Publishers are starting to grasp that “every page is a home page,” because readers aren’t necessarily coming through the front door but more often directly to stories from search and social networks.

But publishers also need to be flexible in recognizing the content they feature on their site needn’t be just their own. The reader doesn’t care where they get the information—as long as they get it. Services like Yellowbrix (used by Foliomag.com) pull stories for a designated topic right to your site (with attribution to the original source). Even the stalwarts of traditional media have embraced link journalism: The New York Times is launching an alternative site featuring stories from competitors while The Washington Post just launched a page called Political Browser that pulls together political stories, video, facts, statistics and photos from around the Web.

Smaller Publishers Can be a One-Stop Shop

Publish2 is a social network that enables journalists to build their own profile and share their work. The site, which soft launched over the summer, also gives journalists at smaller organizations the means to practice link journalism without dedicating existing staff to finding stories or having to pay fees to an aggregator to do it for them. “One of the barriers to smaller publishers is the infrastructure to do this—how do we get this into the CMS? How do we get people to have time to do this?” says Karp. “The key to what we’re doing is to make linking really easy for journalists to do. This is a way for publishers to incorporate links into what they do in way that’s easy and scaleable.” 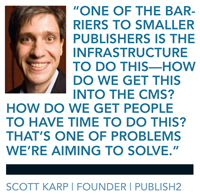 The core of the system is book-marking, which is familiar technology to even the most Luddite editor. “We’ve tried to make this really simple on the front end,” says Karp. “This is one way they can contribute that’s low friction.”

Users choose a standard tag from the drop down menu and under “Common Tags” and write a description of what they’re linking to. This appears in the same window as the article, making it easy to reference. Readers can comment as well. “We want to get journalists link-blogging, which has been around for a long time,” says Karp. “The idea is not just a selection of links but comments on why this is important, why we recommend you read this.”

Publish2 tries to balance the public and private features of this system. Journalists can work in a private sphere where notes will only appear to the user. Check boxes include MyLinkJournalism, MyResearch,  and MyClips. MyLinks serves as the user’s main link page. “The idea is journalists can start building their brands as a filter for their Web,” says Karp.

Different Than Other Social Sites

Publish2 offers a feature called MyNewsgroups, which Karp says editors can design as an edit system. “This is one point of departure from a consumer application like del.icio.us,” he says. “When we were working with a lot of newsrooms, they said ‘we want multiple contributors adding links. But we want to have full edit control—editing comments, fixing headlines, deleting off-topic posts.’ That’s what the newsgroup is designed for.”

Users can create a newsgroup for their market with headlines chosen by staff editors, who can also invite other contributors and editors to join. Editors can also implement a standardized way to present headlines. With MyNewsgroups, every page has an RSS feed from which users can directly publish. Every page also features a widget creator.

“The idea here is to create a CMS for links as a way to manage this process on the back-end,” says Karp. “We can have a lot of people contribute with an easy way to manage it. It can also be customized to look exactly like your site.”

Michelle Leder is an award-winning financial journalist and author of the site Footnoted.com, which exposes items that companies bury in their routine SEC filings, and an early member of Publish2. “In my sidebar I link to stories that I think will be of interest to my readers, who tend to be hedge fund/money managers, given the specific nature of my content,” she says. “Unlike a lot of other blogs, I do new reporting based on stuff in the filings, so I don’t spend a lot of time commenting on stories in the WSJ, Times, etc. The Publish2 widget gives me an opportunity to easily link to these stories.”

Vewd.org is a site that attempts to connect photographers with high-end magazines.  “This is great tool for me to use to connect readers with others doing same thing I am,” says CEO Matt Blalock. “It’s a great way for me to link to another story. We were linking to a lot of content elsewhere but there’s only so much you can say about another article. This was perfect.”

Vewd has linked to sites such as National Geographic and the National Press Photographers Association. Blalock dismisses concerns over links sending the audience away. “They’re going to go away if you’re not offering what they need,” he adds. “In our space, there may be 20 different media outlets pretty much saying the same thing. We need to be the source where they find out about everything, even if we’re not writing about it. That’s link journalism.”