TV Guide Sold for $1!
Macrovision to loan investment firm up to $9.5 million to fund acquisition. 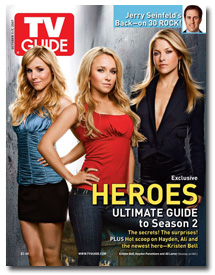 Apparently Reed Elsevier isn’t the only publisher willing to pony up millions of dollars in order for someone to purchase its magazines.

TV Guide owner Macrovision earlier this week said it agreed to sell the print edition of TV Guide to Beverly Hills, California-based investment firm OpenGate Capital. Terms were not disclosed at the time of the announcement, but according to SEC filings, OpenGate purchased the magazine for $1, less than half the cost of a single copy of the magazine.

According to the most recent Publishers Information Bureau figures, ad revenue at TV Guide was mostly flat through the third quarter at $154.7 million, up 2.4 percent. Ad pages, however, were down 7 percent in comparison to the same period last year.

In its announcement, Macrovision identified the print magazine as business "not aligned with its core corporate strategy.” The company said its primary goal for the product is to consolidate “key technology assets, including the interactive program guides.”