Last year was one of the best in recent memory for tradeshow market, according to a new M&A report from Corporate Solutions, a merger and acquisition advisory firm specializing in the tradeshow, consumer show and trade publishing industries.

“It was a much more active year for domestic tradeshow acquisitions, with 25 deals that closed in 2012,” a statement from the group says. “This was more than double the volume from the 10 deals closed in the year prior. For the first time in the past several years, there were a mix of small, medium and larger size transactions.”

The fourth quarter of 2012 proved to be the most fruitful for the industry, with 10 of the 25 transactions occurring during that period. Current market conditions show a spike in the amount of buyers looking for trade and consumer shows to acquire, as well as significant increases in show producers interested in selling trade and consumer events.

Though last year showed a marked improvement from years prior, Corporate Solutions stopped short of claiming the industry is totally out of the woods. The macro issues faced by organizers—the domestic recession or managing the digital landscape, just to name a few—have not gone away, but there is renewed hope in the marketplace.

“The M&A market, like all other industries, is cyclical and we certainly have seen the bottom in the market back in the first quarter of 2011,” says the company. “As the M&A market activity continues to increase, we will see many deals close with larger event companies acquiring smaller competitors. Events that have grown at any rate or declined only modestly during the past three years will be in demand as buyers come back in the marketplace with strong interest. The increase in demand will cause valuations to increase modestly throughout the year.”

Check out some of our industry’s top M&A activity seen in 2012 below: 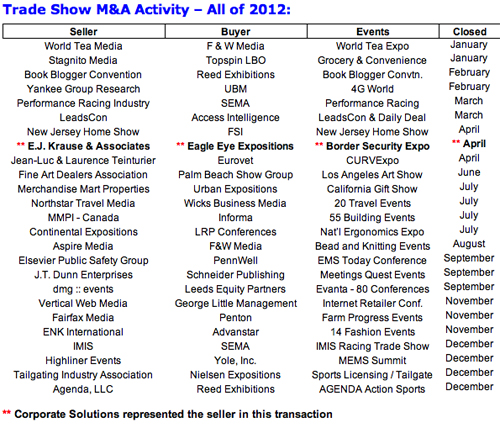