Although technology and engineering titles continue to dominate the top of the list of publishers reporting digital editions with BPA, this past year saw a fair amount of newcomers to the top 20, a sign that more members are turning to digital editions to cut costs and serve international subscribers. On average, digital copies made up 17.4 percent of total circulation for all BPA members reporting them on their December 2009 statements, a 2 percent increase from the June 2009 reporting period.

Oracle tops the list once again with a 3.7 percent increase in digital circ to 187,897 from December 2008 to December 2009. This increase, however, pales in comparison to Oracle’s 47.5 percent digital circ increase between December 2007 and December 2008. Digital editions account for 36.4 percent of the magazine’s total qualified circ.

Publications such as Angie’s List, which reported 177,907 digital copies, Chief Executive China (67,333), Website Magazine (17,026) and IEEE Spectrum are new to the top 20 this year in terms of digital circulation. IEEE Spectrum reported 29,974 digital-only subscriptions on its December 2009 statements and digital editions account for 8.1 percent of the title’s total qualified circ.

“From our perspective, digital editions are a win-win strategy,” Jim Vick, staff director, IEEE Media and publisher, IEEE Spectrum Magazine, said in a statement. “We realize a significant cost savings with digital copies, while at the same time serve our readers—especially our international subscribers—in a more timely fashion. We can also leverage additional ad revenue programs with digital copies.”

The total count of BPA members reporting digital circulation increased 26 percent to 426 in December 2009—compared to 338 six months earlier and 308 in December 2008.

BPA introduced a few rule changes for members reporting digital editions in 2010, such as requiring that all members complete a “Statement of Content Platform” and allowing members to fulfill subscription requests with digital editions as long the subscriber receives advance notice of the change and is given the option to decline. 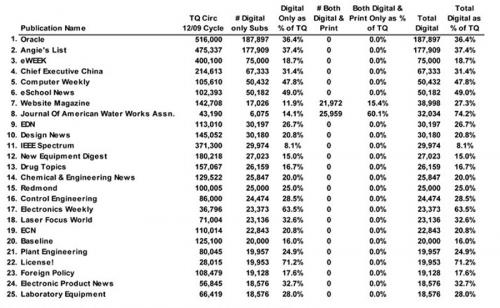