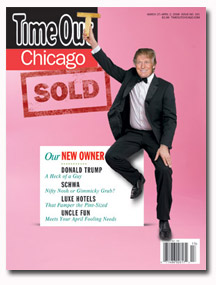 Starting next week, readers of Time Out Chicago will notice several significant changes.

Most prominently, the magazine’s logo will be modified—in Chicago only—to include the signature glitzy T that adorns Trump’s properties, including the new Trump International Hotel & Tower here.

Time Out founder Tony Elliott, who long has resisted selling off the publishing empire he launched in London 40 years ago, says Trump’s premium bid will enable the company to more quickly expand into multiple new markets in North America and the U.K.

In a meeting held with Time Out Chicago staff Tuesday outside his new downtown hotel, Trumped stated, “I am hugely excited about what is a truly huge opportunity for Trump Entertainment and an even huger opportunity for the people of Chicago.”

Launched in 2005, Time Out Chicago is recognized as a leading source of information for arts, entertainment and culture. The signature of Time Out Chicago is its comprehensive listings sections and irreverent features, offering both insight and information on music, clubs, film, theater, dining, drinking, books, shopping and more – all written and edited by a passionate staff of locals who are experts in their respective fields.

Time Out called Crain’s, then issued another press release admitting the hoax.

Despite the ridiculous quote from Trump (three "huge"s?—c’mon, Crain’s!) don’t be too hard on ’em—this was, after all, released on March 25th!