Time Editor: Someday There Will Be People Who Don’t Know There’s a Print Version
Stengel: ‘We want people to be addicted to the magazine.’ 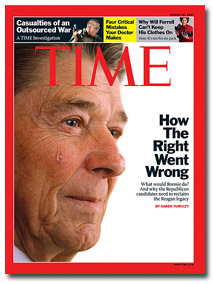 Time magazine’s managing editor Richard Stengel opened the Direct Marketing Association’s 22nd annual Circulation Day event today in New York with a keynote that largely addressed the magazine’s relationship with the Web site. Recounting the last year and a half, Stengle noted the magazine’s redesign, ratebase reduction, the new publication date and the Web site’s expansion into a product that stands out as a separate, 24/7 news site.

Broadly, Stengel said the magazine needed to regain its status as a vital read, in a way that vaguely echoed the luxe leanings of other high-end publications. “We have to become a more premium product with beautiful paper and photography,” he said. “Each medium needs to do what it does best. A magazine should be something you’re addicted to.”

The Web site, too, had, to Stengel, become static. “We were a traditional magazine Web site. We decided we should be a 24/7 news Web site.”

While the two products should be complementary halves, Stengel added that they nevertheless offer two very different perspectives on world news—and lately have been downplaying the opportunities of driving the audience from one platform to the other. Focus groups revealed that readers didn’t necessarily appreciate the callouts in the magazine to go to the Web site to see more information on a particular story, he said. “Why are we doing that? It doesn’t make sense,” said Stengel. “They should be two separate audiences. Someday there will be people who don’t know there’s a print product.”

In 2007, the rate base reduction, a cover price increase and a redesign of the magazine contributed to the second most profitable year in the magazine’s history, said Stengel. “It was during a time that we thought was going to be a transition year.”

Raising the cover price by $1.00, Stengel said, increased newsstand profitability but also caused sales to contract “a little.” Indeed, according to the recently released Fas-Fax report, single copy sales for the second half of 2007 fell to 107,277 from 133,084 in the same period 2006—a 19.4 percent decrease.

Stengel said that print has largely ceded breaking news to online and, as a result, has become the more analytical of the two platforms. “There’s no news that breaks in print anymore,” he said. “Print takes the facts and adds insight. Online is for the ‘what’ and print is for the ‘why’. The magazine puts it in context and that’s why we see them as complementary brands.”