Three Months After Shutting Its Doors, San Diego Magazine Returns
With a smaller staff, the magazine is publishing fresh content online and says its print edition will return in August. 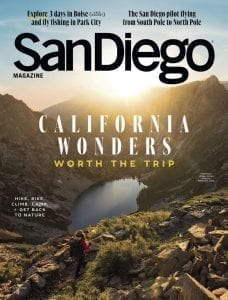 When San Diego magazine abruptly ceased operations and laid off nearly all of its employees in late March, mere days after a statewide shelter-in-place order took effect in California, CEO and publisher Jim Fitzpatrick stressed that it was only a temporary pause and that he hoped the magazine would return when the local economy began to reopen.

“This month, we are happy to announce that we have reopened our doors. We’re excited to once again tell the stories of the people and businesses making San Diego the incredible city it is,” wrote editor-in-chief Erin Meanley Glenny in a note posted on the the magazine’s website on Wednesday, adding that a “very small staff” is currently at work on an August/September print edition, in addition to resuming regular editorial content online.

In total, 20 of the 37 staffers who were laid off in March have been re-hired, Fitzpatrick told Folio: in an email, adding that the plan is to eventually bring the staff back to full capacity, “but it depends on market conditions.”

The magazine will produce bimonthly issues for August/September, October/November and December/January, with the hope of reverting to a monthly frequency after that.

“We plan to be resume monthly frequency in 2021, but that remains to be seen,” Fitzpatrick said.

Paid subscribers will have their subscriptions extended for three months to make up for the hiatus, Meanley Glenny added in her editor’s note.

“Shutting down was strictly a business decision due to outside forces, including an absence of public events and advertisers on hold,” Fitzpatrick explained to the Times of San Diego. “The people, places and things that we typically write about weren’t open. But, I never doubted that we would re-launch and return in the near future, it was just a matter of when.”

San Diego did occasionally post fresh content to its website in the interim, including a June 2 listicle promoting black-owned restaurants in the city. That article led to some scrutiny of Fitzpatrick’s personal Twitter account, particularly a handful of since-deleted Tweets from 2017 to 2019 in which the publisher called NFL players who knelt during the national anthem “ungrateful” and “disrespectful,” and labeled quarterback Colin Kaepernick in particular a “moron” and “asshole.”

“I was wrong,” Fitzpatrick wrote in a Medium post on Friday in which he apologized for the Tweets. “My posts were insulting, and they disregarded the severe problem of police brutality toward black people in America. I regret that it took the recent tragic killing of George Floyd for me to understand.”

Acknowledging that San Diego magazine is currently operating with a limited staff, Fitzpatrick, who owned the publication from 1994 to 2005 and then reacquired it in 2010, pledged to “ensure that our hiring practices seek to better represent the diversity of our great city” once the magazine is able to begin hiring for new positions.