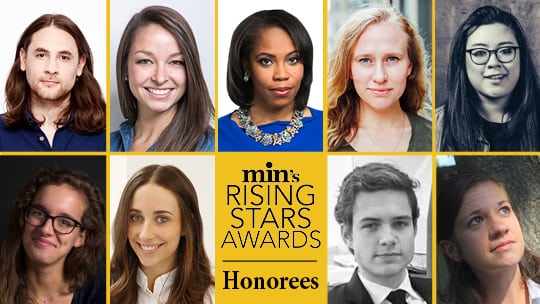 Congratulations to min’s 2017 Class of Rising Stars! This list is comprised of inspiring leaders, 30 years and under, who have taken on new challenges and made an impact on the media industry. These individuals are editors, writers, social media pros, bloggers, brand leaders, marketers, and salespeople, who are laying the groundwork for the evolution and future success of magazine brands. Honorees of this program were nominated by coworkers, peers, and mentors for this prestigious honor.

Jessica Farris serves as the editor of HOW magazine, as well as the online content director of howdesign.com and printmag.com at F+W Media. Over the past three years, Farris has expanded average annual online traffic by more than 40 percent per site by focusing content strategy on SEO, trends and news, and has helped the brand’s social platforms grow by more than 900,000 followers. Additionally, under her leadership, Harris has significantly expanded online advertising opportunities for the organization.

Nicole Ferraro is a senior account executive at Bloomberg Media. During her time with the organization, she has secured over $3.1mm+ of newly found revenue culminating through cold calling, strategic account growth, and ground-up, solutions-selling. Additionally, Ferraro has taken on several key mentorship responsibilities at the company, including formally training its Enterprise team on the fundamentals of the audio marketplace. In her role, Ferraro has proven her ability to enthusiastically book new business, while growing the foundation of Bloomberg Media’s core clientele.

Amanda D’Amico is a planning and campaign manager at Bloomberg Media. In her position, she plays a vital role across all her businesses, and has made exceptional contributions to the organization, all of which have helped solidify client relationships and led the way for a significant increase in revenue. Specifically, D’Amico oversees many of Bloomberg’s larger initiatives, including Microsoft, AT&T Siemens and Samsung. Colleagues describe her as passionate, driven and creative, always shining through her leadership and providing guidance to her peers.

Katrina Alonso joined the Playboy team about a year ago, where she began as a coordinator on the brand strategy team, rising to senior brand coordinator, and now to her current role as creative director of Playboy.com. In her short time with the publication, Alonso has already proven to be a devoted member of the team, achieving significant milestones in product design and branding & art direction for the brand, including increasing sales in the Playboy shop, providing creative direction on Playboy.com, and heading branding and art direction for various brand events.

Danielle Cadet is the senior editor of The Undefeated at ESPN, where she plays a vital role in encouraging editorial creativity, managing interpersonal relationships, and developing the site’s business potential as the primary editorial liaison for the multicultural ad sales team. In her role, Cadet has used her knowledge of digital media to implement standards for SEO, social engagement, and day-to-day coverage, causing an increase in traffic and appearance in search results. Additionally, she has helped the company expand through content partnerships with The Huffington Post Black Voices and Essence.

Will Hosinski is a sales representative at Forbes Media, where he has already broke new business and grown top accounts for the company’s largest business, including IBM, SunTrust, Delta, Monster.com. Hosinski works across a multitude of verticals, including many key categories of advertising for the company. Colleagues say that his forward-looking economic mindset and knowledge of technologies and trends have led him to manage some of the Forbes’ most complex account relationships with success.

At Forbes Media, Dan Hennessy has been instrumental in executing the company’s “science and art” marketing strategy. In his role, he has built new interactive tools and custom special features, websites, branding, presentation templates, interactive ad units and sales decks to appeal to the company’s audience and advertisers. Colleagues say Hennessy is a leader who helps Forbes stay fresh and modern, leading the organization toward a bright future.

Kelsey Albina is the marketing manager for Bonnier Corp.’s Fishing Group, where she oversees large marketing initiatives. Colleagues say Albina tackles her position with positivity, perspective, excitement and ambition, always going above and beyond. In her role, she actively participates in the sales process, including client calls, meetings at boat shows, etc. Albina has established a high conversion of proposals produced to sales, and her team holds her in incredibly high regard, describing her as an “indispensable” part of the sales process.

Katherine Whittaker joined the Saveur team in May 2016, where she has established herself as a savvy digital editor, innovative video lead and international journalist. In her role, colleagues say she is the point person the for the brand’s video program, overseeing a stable of freelancers and video publication schedule. Additionally, she shoots and edits video, pitches original stories, manages the brand’s video library and asset database, and trains the entire team in video production.

Amy Schellenbaum is the online director for Popular Science, where colleagues say she has led the team to record-breaking achievements with grace and humor. Under her leadership, the brand’s social presence has grown significantly (in June alone, the brand’s monthly audience grew 38% with an increase of unique visitors to its site of 32 % year over year). Additionally, she headed a total redesign of the brand’s website, working closely with the company’s development team. Her peers say she’s a great communicator, and has helped implement a tone within the office of support, inclusiveness, humor and cheer.

Liana Gergely is the manager of branded content strategy at The Foundry at Time Inc. During her year and a half with the organization, she has been promoted twice. In her role, she leads ideating and strategy for fashion and beauty across the Time Inc. collection. Colleagues say her content strategy insights and editorial intuition have significantly enhanced content performance and delivered ROI for large clients. Additionally, peers add that Gergely exemplifies superior client presentation skills and deep understanding of the branded content marketplace.

Kelsey Haywood is the content and marketing director of GIRLS’ LIFE (GL) magazine, where she oversees editorial and sponsored content across the brand’s platforms. Haywood’s colleagues describe her as “a true girlboss” who delivers empowering, inspirational and diverse content to the publication’s audience. Peers say she exemplifies exceptional work on client-and-consumer-facing aspects of the brand, and has impacted her community in incredibly positive and meaningful ways. In her role, Haywood has ensued consistent, girl-positive messages for both GL’s audience and advertisers.