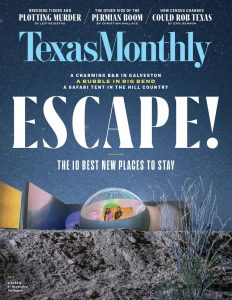 Less than three years after its acquisition by private equity firm Genesis Park, Texas Monthly is changing hands once again.

The Austin-based regional magazine confirmed Tuesday that it’s being purchased by billionaire oil heiress Randa Duncan Williams in a deal expected to close on June 30. Financial terms of the transaction have not been disclosed (Genesis Park and its founder, Paul Hobby, paid $25 million to acquire the magazine from Emmis Communications in 2016).

“I have been an avid Texas Monthly reader since I was a teenager,” said Williams, who serves as chairman of Houston-based Enterprise Products, the Fortune 500 oil pipeline company founded by her late father, Dan Duncan, in 1968. “My family is delighted to provide the resources to support this iconic Texas institution, which is nationally recognized for its editorial flair. The journalistic integrity and quality for which Texas Monthly is known will remain unchanged as we build upon what Genesis Park has done over the past two years.”

Williams will take over as chairman of Texas Monthly, LLC, a newly formed subsidiary of Enterprise Products, upon the sale’s completion, which will mark the third ownership change in Texas Monthly‘s 46-year history. Founder Mike Levy owned it for 25 years before selling, in 1998, to Emmis Communications, which held onto the magazine for 18 years before divesting it and a number of other city and regional mags in late 2016 and early 2017.

Genesis Park and Hobby, who took over as CEO after acquiring the magazine, came in pledging to invest in Texas Monthly‘s online presence and live events in order to reduce its dependence on print advertising, and a note posted on its website Tuesday says digital advertising and event sponsorships now account for 38% of Texas Monthly’s overall ad revenues, up from just 14% in 2016.

But despite apparent financial stabilization, Genesis Park’s ownership wasn’t free of turbulence. Brian Sweany, the magazine’s editor-in-chief, exited shortly after the acquisition, kicking off a string of high-profile departures from the masthead. Sweany’s replacement, Tim Taliaferro, then himself needed to be replaced after the emergence of an ethics controversy over an alleged pay-to-play arrangement involving the magazine’s February 2018 cover (Taliaferro, who was reassigned within the company, denied any wrongdoing).

The Financial Times first reported yesterday that Hobby had retained Goldman Sachs to explore a sale of the magazine.

Dan Goodgame, who Hobby hired as the magazine’s new editor-in-chief earlier this year, will stay on after the sale, alongside Texas Monthly president Scott Brown.

“What Genesis Park brought to us was the investment needed to begin to extend our brand beyond print to the platforms where audiences and revenue are growing,” said Goodgame in a statement. “What Randa wants to bring is an acceleration of those investments—to make the print magazine better than ever and extend that same level of excellence in storytelling across other platforms. That requires resources. And she intends to provide them.”

With a Forbes-estimated net worth of $6.2 billion, Williams becomes the latest deep-pocketed benefactor to an award-laden magazine in recent years, following Laurene Powell Jobs, whose Emerson Collective has invested millions in The Atlantic and The California Sunday Magazine since 2017; Salesforce billionaires Marc and Lynne Benioff, who acquired Time magazine for $190 million in September; and Chatchaval Jiaravanon, the son of Thai billionaire Sumet Jiaravanon, who bought Fortune magazine for $150 in November.

“[Williams] wants to own it forever,” said Brown. “She is committed to a long-term investment, and that is a great opportunity for us to adopt a set of long-range business drivers.”