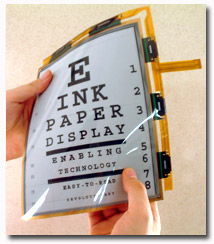 To commemorate its 75th anniversary, the October issue of Esquire will feature a flexible electronic "paper" cover that allows words and images to scroll across it—a first for magazines, according to parent company Hearst.

"We decided to dedicate our 75th anniversary issue not to the magazine’s past but to our culture’s near future," editor-in-chief David Granger said in an interview with FOLIO:. To pull it off, the magazine tapped E Ink, the Cambridge, Massachusetts-based electronic paper display technologies firm that developed the electronic paper display [EPD] technology for Amazon’s Kindle and the Sony Reader. The result, Granger said, is "a very literal representation of our theme: ‘The 21st Century Begins Now.’"

Those words will flash across the cover of 100,000 copies when it hits newsstands in September.

‘Microcapsules Thinner Than a Human Hair’

Development of the EPD cover began about two years ago, according to Granger, when he and his team, with the developers at E Ink, began discussing how to create a flexible electronic cover. Hearst Interactive Media acquired a stake in E Ink about seven years ago.

"The cover is made up of microcapsules that are thinner than a human hair and are very small in diameter," said E Ink vice president of marketing Sriram Peruvemba. "How it basically works is that the microcapsules contain black and white pigments. When a charge is added, depending on the polarity, the pigment particles rise to the top creating the image you see."

In order to make the cover seem as much like paper as possible, E Ink used a flexible plastic to bind the device instead of glass, which is traditionally used in other LCD devices, Peruvemba said.

To get the design right, E Ink collaborated with Hearst’s manufacturing department, Structural Graphics (the company which is assembling the cover) and printer R.R. Donnelley (which is printing and binding the magazine) to better understand how magazines are put together. Temperature became an issue during the assembly process, Granger said, since extreme temperatures deteriorate a battery’s life expectancy. "We had to arrange for everything to remain cool at all times during the assembly process," he said. "That’s not something magazines normally have to think about."

RELATED VIDEO: Granger on the Industry’s Need to Innovate

Another obstacle was designing a power source—and the chips that operate the device— small enough to fit within a magazine cover. Hearst turned to a Chinese engineer to come up with something innovative, and small. "Look at Amazon’s Kindle: it’s mostly battery," Granger said. "The electronic paper screen is very thin and pliable, but Amazon builds a superstructure around it to protect it and power it. We had to fit that into a magazine cover while preserving the cover’s integrity."

The battery should last for roughly 90 days, the company says.

A Paperless Future for Magazines?

Creating the industry’s first magazine with an EPD cover doesn’t come cheap. While Hearst declined to reveal the final price tag, the publisher helped offset the cost by selling the inside cover ad to Ford, which also will utilize the EPD technology.

Granger hopes the technology becomes cheaper, and thinks that EPD could revolutionize the way we read magazines.

"We’re hoping we can find ways to bring costs down through scale or more advance planning so that we can do it again," he said. "I think there are a lot of options."

Hearst is also hoping to offset costs by upping the cover price. The special anniversary issue, only available on newsstands, will sell for $5.99—two dollars more than its normal cover price.