A Tale of Two Economic Indicators: Publishing’s Long Road to Recovery Will Require More Detours
Things may get worse before they get better.

This morning I woke up to two very different pieces of news, yet they are very much connected.

The first was the news that the U.S. unemployment rate fell to 11.1% in June, and as a nation we added 4.8 million jobs to the economy. Certainly it’s good news that the trend line has moved downward for two straight months, and people are returning to work. 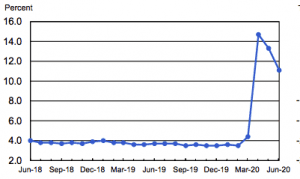 Still, economists warn that May and June’s numbers are a little rosier than reality, due to the tracking methodologies. I won’t get into this since it’s not really the point I’m working towards. And regardless of what the numbers might actually be, neither May nor June were particularly good. Make no mistake about that. No matter how much spin you put on it, double-digit unemployment figures are not an indicator of a strong economy, regardless of what a month-over-month trend line looks like, or how the stock market is performing. After all, when you zoom out a little further, that line looks especially bad when just five months ago our unemployment rate was 3.8%. And for what it’s worth, soaring stock markets don’t change the fact that millions have people have lost their jobs and entire industries have been decimated.

Obviously there are extenuating circumstances that are responsible for where we are today. COVID-19 has ravaged our lives and our economy, and it happened almost overnight. So believe me when I say I am not trying to rain on anybody’s parade when we get a little bit of good news. Considering the state of things, we should celebrate every win. And it is heartening to know that nearly five million people returned to work last month. Still, it’s that other piece of news I heard this morning that is preventing me from being particularly joyful.

Yesterday, as a nation, we reported the highest number of new COVID-19 cases in a single day at 54,357 (per latest CDC data). This wasn’t an outlier, these numbers have been steadily increasing over the past few weeks, after it seemed as though the curve was flattening. This isn’t a phenomenon driven by a few new clusters. The fact is that 37 states are on the rise right now, and some, like California, are being forced to roll back their reopening strategy. We’ve already begun to see the economic impact of this rising surge of new cases, as 1.4 million new unemployment claims were filed last week.

I’m not going to entertain a political debate on what has caused this spike in new cases, when scientists have already determined the cause. And to be clear, this isn’t the second wave we’ve all been nervous about. Nope. That would suggest we actually got through the first wave. This, instead, is a brutal reminder that we have a long road ahead, and frankly, that’s terrifying and depressing.

I don’t need to spoon feed you my take on why this is bad for the macro economy, if you’ve lived through the past few months it’s pretty damn clear. Publishers have been hit hard by this pandemic, and will no doubt be struggling to hang on for months, if not years, after it finally passes. What’s troubling about knowing this is that we have no reasonable idea when it will actually pass. We are just as uncertain now, as we were in the middle of March when many (including myself) were hopeful (or maybe a little naïve) that we would return to “normal” in a matter of weeks.

Instead, here we are on the precipice of our country’s annual celebration of our independence, while at the mercy of a virus we clearly cannot control.

The third quarter is upon us, and many publishers that rescheduled their events, or paused their print schedule or other business initiatives were looking to this time, and the next quarter, as opportunities to bounce back and reestablish some footing. Instead, in addition to continued malignant uncertainty, we are dealing with the bitterly harsh reality that all of the really important stuff we put on hold may remain that way indefinitely.

This isn’t meant to be some sort of grim wakeup call. I assume most of you are hyperaware of the current state of things, and fully understand what’s at stake. Instead, what I want to express here is an urgent plea to our industry to keep pushing forward with the sorts of creative initiatives we’ve been seeing since March, which are reinventing our industry. Publishers have shown not only a great deal of resiliency, but also an eagerness to evolve quickly, experiment and look ahead and consider what a new business model could look like. This approach will be prerequisite to weathering whatever storms lie ahead—this includes long after the pandemic has passed.

Folio: has been with you through these historically difficult months and certainly hasn’t been immune to many of the same challenges you’re facing. Like you, we’ve had to rethink our business after putting things on hold. Likewise, we are impatiently wondering what’s next. That said, we have also had the good fortune to talk to many of you and learn how you’re proactively responding to the impacts of the pandemic. Having the opportunity to share that information with your peers has been inspiring for us, and I sincerely hope it’s helped you in some way, because it has certainly helped us.

So thank you for providing that inspiration during an otherwise dark moment in time. And I assure you, we will continue to uphold the promise we made to you in March to listen to your questions and concerns, share your insights and do whatever we can to help us all get through this together.