Study: Tablets Still a ‘Nascent’ Market
A Nielsen Company survey shows only 4 percent of respondents own a tablet.

The Nielsen Company recently released a survey that attempts to measure how people are using their mobile devices—smartphones, Kindles, iPads, etc.—along with the kinds of content consumed and interaction with advertising. While the study is a frank reminder of how small the tablet market still is, interactivity-based metrics are promising.

With all the hype surrounding the iPad platform and its potential for traditional media companies, the study, which polled 5,000 device owners, offers an immediate reality check. Only 4 percent said they own tablet computers, prompting the Nielsen reachers to describe the tablet market as "nascent." With an estimated 8 million units sold so far, tablets, as iconic as they are, have not yet reached mainstream status in terms of actual ownership.

While the study indicates that the iPad beats the iPhone in print and video consumption thanks to its larger screen size, paid magazine apps face stiff competition for the owner’s attention. The study says 91 percent of iPad owners have downloaded an app, but magazines are far from the most popular content. Games (62 percent), books (54 percent), music (50 percent), shopping (45 percent), and news & headlines (45 percent) are the top five most popular download categories among the survey respondents. Out of 15 categories, magazines (41 percent) came in 9th, two percentage points above the banking and financial categories (see chart below).

If the iPad ever reaches the market penetration publishers hope for, the study has some particularly good news. Device owners are much more receptive to advertising on iPads than on other devices. Video is a major draw—49 percent of iPad owners said they’re more likely to click on an ad because of it. Forty-six percent of respondents say they "enjoy ads that have interactive features." Only 26 percent of iPhone users can say the same. 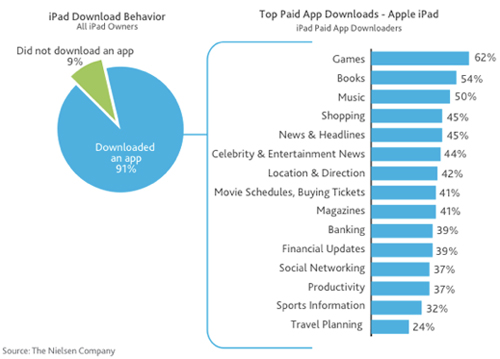