As publishers prep for the next big tablet hope (Amazon is set to release its much-awaited tablet device on Wednesday), a new survey released from global business advisory firm FTI Consulting, Inc. details how digital media users (including tablet users and non-tablet users) are engaging with content.

For many publishers, the biggest challenge of the digital world lies in that people are relying on the web for content, but conditioned in a way where many believe this content should be free. There are success stories, of course (Financial Times led the way for the metered pay model now used by The New York Times), but most publishers haven’t developed a successful formula to get readers back to magazine content (albeit in a new form).

What is clear from the survey is the huge level of opportunity for magazine publishers in the digital sector. Of those who responded to the survey (including 1,000 US and 500 UK users, polled between May 24 and June 2, 2011), only 38.4 of digital media users engage with digital magazine content.

According to the summary included with the survey, “The youngest age group consumes news content online nearly as much as all the other age groups – all between 65 percent and 75 percent of respondents.”

The 25-35 year old demographic are the largest users of mag digital media, with 18-24 year olds as the next most engaged group.

“Favored features across media”, which translates to options that users are willing to pay for, include: custom content and apps; and quality graphics and photographs.

Many magazines now offer digital access to users as an add-on to current print subscriptions; but Bruce Benson, a senior managing director/global leader of communication of media and entertainment solutions with FTI, sees a different opportunity with print/digital bundles.

“Media companies may win a small number of converts focusing on ‘new’ customers; but the real opportunity exists among individuals who currently have print subscriptions or are regular newsstand purchasers. It’s these individuals who can be enticed to pay for a bundled print/digital subscription that offers special features unavailable to non-subscribers,” says Benson in a FTI press statement. 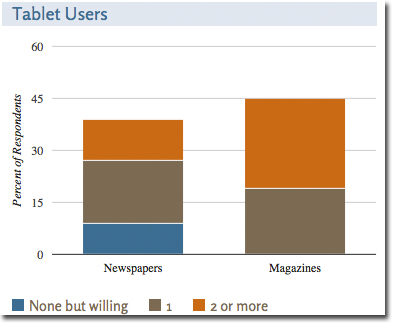