Stop Blaming Profit Motives for All of Journalism’s Woes
If only it were that simple. 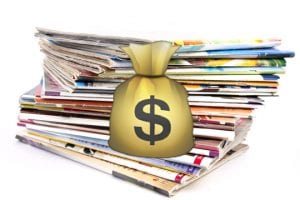 This just in: the root of the publishing crisis, according to TheOutline.com, is…capitalism!

“It’s that newspapers and outlets are being decimated and dismantled by hedge funds, venture capitalists, and tech companies in search of profit. In short, it’s capital ceaselessly looking to expand itself at the expense of its workforce. See: BuzzFeed firing 15 percent of its staff last month even though the company’s revenues are growing — just not by enough.”

Never mind that BuzzFeed is still running on VC investment and makes no profit at all. Not “not enough” profit. No profit. But whatever. How dare those parasites reduce the amount of cash they are setting fire to every month?! Who do they think they are?!

And it’s not just greedy VCs. It’s also big chains, who, in spite of being so large and publicly traded and super business-y, stubbornly seek to please their audiences and keep the lights on. This from Molly Wood of “Marketplace,” on the bogeyman of corporate consolidation:

“It’s part of the reason mass media seeks ratings and clicks over caliber — and that’s why people don’t trust the media. It’s also arguably why corporations like Gannett have grown so big they have to lay people off just to stay afloat, which in turn hurts the news business, which in turn hurts all of us — not just those of us sitting here wondering about our own jobs.”

Yes, that is correct. Clickbait comes primarily from gigantic corporations, which exclusively trim their budgets while your local paper or city magazine doubles or triples or quintuples its editorial budget, because they simply care more. If only, back in the 20th century, Gannett—and Knight-Ridder, Hearst, Time Inc. and Times-Mirror—hadn’t rolled up so many independent publications and bundled them and securitized them like mortgage tranches and greedily demanded profit margins that sapped the lifeblood out of the publications, we wouldn’t be in this fix. It’s the greed of the public markets that acclimated owners to unsustainable margins.

For the purpose of that righteous argument, all you have to do is pretend that the media business wasn’t a capitalist enterprise with obscene margins for three centuries before the first publisher went public. And that it didn’t enjoy those margins because barriers to entry were vast, and therefore competition was minimal and the value to all stakeholders—publisher, advertiser, audience—was roughly equal. And that it was a perfect economic ecosystem right up to the brink of the digital revolution. And that the revolution isn’t the point. Nor the demolished barriers to entry. Nor the glut of competition. Nor the crushing supply-demand imbalance. Nor the digital ad avoidance. Nor the bots. Nor the crooks. Nor the predatory duopolists.

Nope, the problem is the profit motive. This from Robert Kuttner & Hildy Zenger in The American Prospect.

“Private equity has been gobbling up newspapers across the country and systematically squeezing the life out of them to produce windfall profits, while the papers last. The cost to democracy is incalculable.”

Oh, for crying out loud.

Look, democracy is indeed at risk, and capitalism has plenty to answer for, not least over the unscrupulous relationship between Wall Street and politicians that is on the verge of fulfilling Marxist prophesy about the gross imbalance of wealth between the capital class and the proletariat.

And, yes, such private equity scavengers, like Alden Capital, are certainly swooping in to feast on the carrion of the industry. They are indeed gutting what little survives of local and regional publishing. But they aren’t the problem—any more than the liquidators who will sell off Payless Shoes’ inventory down to the store fixtures are the problem with the retail business. They are simply the last manifestation of the life cycle.

When the coroner is called to the scene of a discovered body, he or she never lists the cause of death as decomposition.

If you wish to understand the fundamental problem of publishing, it’s that capital no longer buys you anything but the opportunity to lose money because there’s not enough revenue. And there is little hope that enough revenue will materialize to save the day. But we are so desperate about the damage, and so desperate to assign blame, that we simply default to our old suspicions, threadbare philosophies and historical villains. Here is someone most familiar with that phenomenon, and he kind of nails it.

“The tradition of all dead generations weighs like a nightmare on the brains of the living. And just as they seem to be occupied with revolutionizing themselves and things, creating something that did not exist before, precisely in such epochs of revolutionary crisis they anxiously conjure up the spirits of the past to their service, borrowing from them names, battle slogans, and costumes in order to present this new scene in world history in time-honored disguise and borrowed language.”

The author of that passage, of course, is Karl Marx.