Tablet sales are expected to spike to 326.3 million, according to Gartner, Inc. Despite the iPad’s popularity, just as publishers hoped, the Amazon Kindle Fire tablet is already proving to be a worthy contender. Reportedly, Amazon’s new device sold 250,000 units in the five days since its launch.

The MobileSTAT Report cites that 56 percent of tablet traffic on the Jumptap network occurred outside the United States.

The Report also shares 91 percent of global tablet traffic occurred through Wi-Fi. According to Jumptap analysis, this indicates the tablets “are not truly mobile”, as a user is central to an Internet source while utilizing tablet technology.

While tablets rank high on publisher concerns, smartphones are in queue for the next big content transition. At yesterday’s MPA American Magazine Conference, Hearst Magazines president David Carey said, “The paid content model is coming to the iPhone.” If this proves true, advertisers will have an even greater chance of increased exposure through new technology.

Advertising engagement through smartphones is low thus far. “Three groups continued to exhibit the highest mobile click-through rates: users ages 45-74; those with income levels of more than $50,000; and males,” says a Jumptap press statement. “A clear new challenge for advertisers is getting beyond CTR to connect with younger, less-affluent audiences whose presence on the Jumptap network is large, but whose propensity to click on ads is low.” 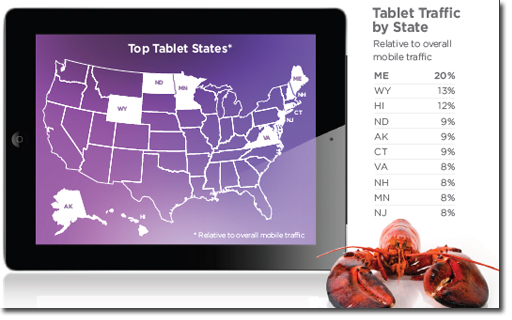