As the lines between journalism and advertising become increasingly blurred, media companies must be on high alert for potential pitfalls around the failure to properly disclose sponsored content. The proper characterization of content as commercial advertising, and the proper disclosure of such sponsored content, has drawn the scrutiny of both the Federal Trade Commission and the National Advertising Division in recent years. Teen Vogue’s equivocation on whether an uncritical article on Facebook’s role in the 2020 election amounted to sponsored content provides many lessons from which other media companies should learn.

Earlier today, Teen Vogue published an article titled, “How Facebook Is Helping Ensure the Integrity of the 2020 Election.” The Twitterverse was set abuzz, because it seemed to be overly laudatory of Facebook and did not contain any critical questioning.  Commentators found the questions posed and the tone of the article surprising in light of Facebook’s role in the 2016 election and its recent public pronouncement regarding its approach in 2020. “Interesting pivot for Teen Vogue here to… Facebook PR?” tweeted Steven Perlberg, a freelance writer formerly with BuzzfFeed News and The Wall Street Journal, while Molly Jong-Fast of The Daily Beast described the article as “so sketchy.”

Approximately an hour after it was posted, Teen Vogue added a prominent disclosure below the headline, stating, “Editor’s note: This is sponsored editorial content.” In a surprising twist, while I was writing this article, Teen Vogue then removed the editor’s note. “The sponsored label is gone and I’m hearing from FB it is not sponsored content. WTF is happening?” tweeted New York Times tech reporter Cecilia Kang. When asked on Twitter what the article was, the official Teen Vogue account responded, “literally idk,” and then deleted that tweet. Later in the afternoon, Teen Vogue deleted the article in its entirety. Slate’s Ashley Feinberg summed up the confusion best by responding to the whole mess with a tweet simply reading, “alsdfjalsfklasjdf.” 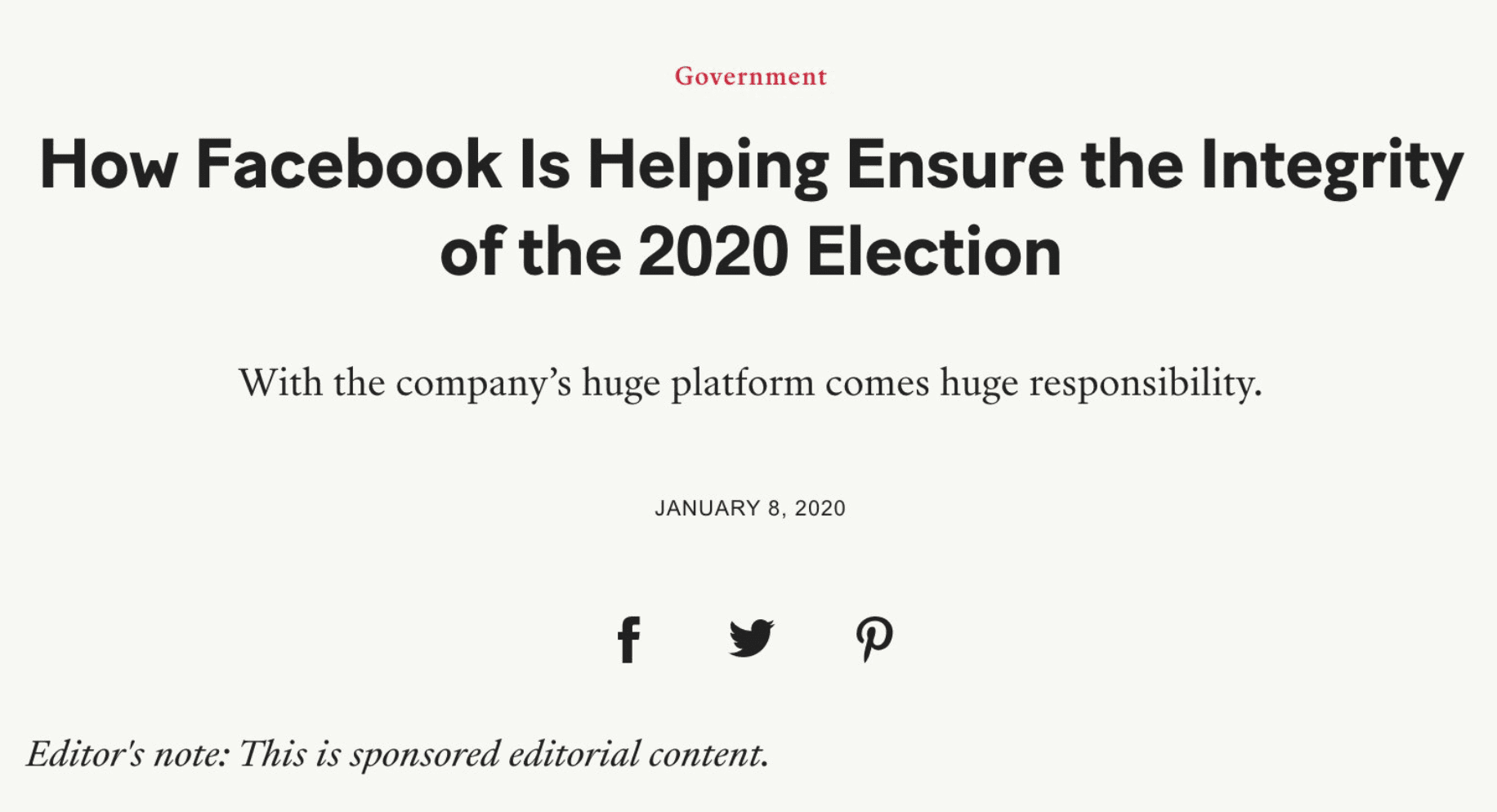 This turn of event highlights two critical tasks for any media company seeking to avoid untoward regulatory scrutiny. First, they must determine whether their content is “advertising,” which includes sponsored content (sponcon) and advertorials. Second, if their content is advertising, they must properly disclose this fact to the audience.

The determination of whether content is “advertising” is not always straightforward and the legal definitions do not necessarily comport with the understanding of a publisher’s editorial staff. On December 22, 2015, the FTC published an Enforcement Policy Statement on Deceptively Formatted Advertisements, which is required reading for any publisher who may seek to walk the line on advertorial content. According to this FTC Policy Statement, “Deception occurs when an advertisement misleads reasonable consumers as to its true nature or source, including that a party other than the sponsoring advertiser is the source of an advertising or promotional message, and such misleading representation is material.”

Industry regulators have recently been interested in investigating undisclosed sponcon and exploring whether purported editorial content is “advertising.” Earlier this year, the National Advertising Division (NAD) launched an investigation into BuzzFeed’s shopping guides to determine whether BuzzFeed was failing to disclose sponsored content. BuzzFeed’s shopping guides are editorial “listicles,” in which the author endorses a number of products, for example, “32 Skincare Products That Actually Do What They Say They Will.”  Buzzfeed then provides affiliate links to those products, to the extent that they can earn revenue from purchases of the product made through those links. The NAD was concerned that BuzzFeed was failing to disclose that these shopping guides were paid advertising.

Ultimately, the NAD determined that these guides are not paid advertising, because the decision of what products to include in the listicle was solely at the discretion of the author, and the affiliate links are added to the listicle only after it has been written.  Thus, while Buzzfeed does profit from the use of affiliate links, the author does not know, when writing the shopping guide, whether an affiliate link will even be available for a given product. The author’s goal is simply “to create engagement with readers in the same way all of BuzzFeed’s content creators are.”

If an article is sponcon, then the publisher must append an appropriate disclosure to the article to “prominently” and “unambiguously” convey to the reader that the content is sponsored. A hot topic in advertising over the past several years has been the appropriate use of disclosures in influencer marketing—#ad and #sponsored disclosures are now ubiquitous. Similar principles apply here.

Teen Vogue statement: “We made a series of errors labeling this piece, and we apologize for any confusion this may have caused. We don’t take our audience’s trust for granted, and ultimately decided that the piece should be taken down entirely to avoid further confusion.”

In general, a good rule of thumb to follow in crafting disclosures, and one endorsed by the FTC, is the 4 Ps: prominence, presentation, placement, and proximity. Prominence means the disclosure must be in large text, likely at least as large as the text of the body of the article. Presentation means that the terms used must clearly convey to the audience that this is sponcon: “This is sponsored editorial content” is a clear message that is easily understood. It avoids legalese and ambiguous language.

Placement refers to where the disclosure appears in the context of the advertising; closer to the headline and the top of the screen is better than the bottom of the screen, where scrolling is required. Particularly with digital media, it is important to take into account that consumers may view the content on different devices, both desktop and mobile, as well as through apps and websites. The disclosure must align with the 4Ps whether viewed on any platform.

Proximity means the disclosure must appear close to the advertising claim at issue. In the case of an advertorial, this consideration is less important, but if only a certain claim in the article is sponcon (for example a listicle with a single sponsored product), it may make more sense for the disclaimer to appear close in proximity to that sponsored product. The now-deleted Teen Vogue editor’s note, placed directly below the headline in a large italicized font, likely satisfies these disclosure requirements.

As the Teen Vogue controversy teaches us, it is important to assess content before it is posted. At times, that evaluation may include both editorial and legal functions. Sponcon must then be prominently and unambiguously disclosed. Adding and removing disclosures and sending conflicting messages over social media does not convey an unambiguous message to readers.  In the digital age, the ability to dynamically edit content and add disclosures does not reduce a publisher’s responsibility to properly disclose sponcon when it is initially posted and to maintain consistent messaging. The failure to adhere to these rules can not only lead to FTC penalties of $42,530 per day, but, more importantly, harm the publisher’s reputation for journalistic integrity in the eyes of its readers.

Joseph Lawlor is a New York-based intellectual property and advertising litigator at Haynes and Boone, LLP.