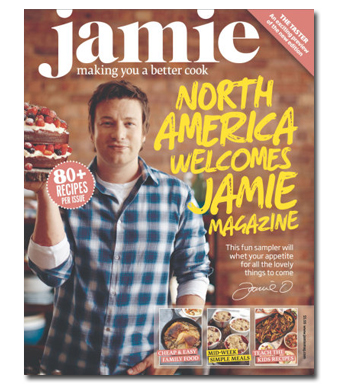 Software development company idoodle is entering into the North American consumer media space with the launch of Jamie Magazine, and is looking to have its first-and-only title be fully mobilized from the onset.

Jamie Oliver—a celebrity chef and Food Network star—is the personality the brand is founded on. The publication, which first launched in the UK in 2008 and has local editions in Russia, Germany and Holland, will cover the entire North American market, from Canada to the Caribbean.

“We as idoodle have been doing a lot of business in the UK as an education software company,” says Robert Sowah, publisher and CEO of idoodlemedia. “We wanted to take some of the innovative things we’re doing in the software world and merge it together with a magazine, which has been a very exciting opportunity.”

Sowah says the publication will distribute about 300,000 copies across the continent by the end of the year, with about 50 percent heading to newsstands. Jamie Magazine will be regionalized on a per-issue basis, says Sowah. One issue, for example, might focus on the foods of New England with the next on the foods of the Caribbean followed by dishes from British Columbia.

“We’re going to North Americanize Jamie Magazine, but still leaving in that wonderful British flair that makes it Jamie,” he says. “We’ve met with the Food Network and all of his shows are over here. He has a huge following and he has been a leader as a chef and food activist. It’s hitting a note with an awful lot of people [that enjoy] eating properly and having fun doing it.”

From the onset, Jamie Magazine will be fully multiplatform, not only for the reader but advertisers as well. Using custom technology and its knowledge in the software space, idoodle will ensure its print content is mobile enabled.

“Our technology can make any image [function] like a QR code,” says Sowah. “When the reader downloads our app they point to Jamie Magazine on the newsstands or their kitchen counter and they will get a few videos from the magazine. It will be Jamie or a chef cooking a few recipes that are inside the issue. Readers can get the recipe for that video, and we’re also integrating the advertisers into that.”

Once a reader presses the recipe, up come the ingredients as well as a sponsored message. If a particular grocery store is sponsoring the video, for example, a message will show that the ingredients are on sale in that retail location and will use GPS technology to show the nearest location of that grocery store.

“We’re taking the reader from the cover of the magazine all the way to the grocery store,” says Sowah. “It can map out the store for you on your phone—if you’re looking for something in particular on sale it will show you where it is in the store. We’re lifting the experience off of the magazine and letting the reader take it with them, wherever that is.”

If a copy of the magazine hasn’t been purchased either on the newsstand or via subscription, a user is limited in the amount of video content that can be seen. After a monetary commitment is made, content exclusives are available through the app, which a consumer can download for their Apple or Android device.

“We’re trying to make things engaging for the reader,” he says. “It’s a fun and engaging way to get readers integrated with the paper. It’s a hybrid for the readers and it also integrates the advertisers—once advertisers start seeing the possibilities of using this sort of technology to offer up traditional information to their users in fun, engaging ways, I think you’ll see an interesting and dynamic change in the way advertising is done.”