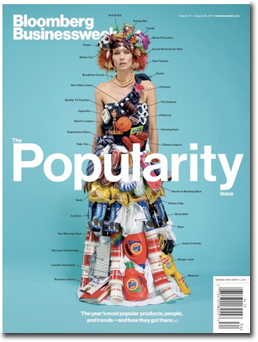 The Society of Publication Designers [SPD] found its Gold Award winner at the 47th Annual Design Competition in Bloomberg Businessweek. Businessweek’s win marks the 15th anniversary of the Magazine of the Year honor, and beat out IL – Intelligence in Lifestyle, Lotus, New York, Port, TIME and GQ (which took home the Gold from SPD in 2011) in the category.

In addition to winners in categories such as Member’s Choice; Tablet App: Original Cover; and Digital: Tablet App, SPD notified over 600 Merit winners by mail.

The Competition took place at Cipriani Wall Street on Friday, May 11. Josh Klenert, president of the board of directors for SPD, says of this year’s Competition, “With our British co-chairs (Luke Hayman, Jeremy Leslie, Richard Turley) and the overseas success of the SPD iPad App, we received more entries from foreign talent, and once again tripled the amount of digital entries.”

The Magazine of the Year Award debuted at the Pub33 Gala in 1997. Klenert says, “The idea, conceived by co-chairs Janet Froelich and Robert Newman, was to create a best-of award voted on by all the judges who participated in the awards. Each magazine is asked to submit 3 different issues from 2011. Submissions are judged for overall design, use of typography, photography and illustration.”

Other notable winners include:

Tablet App (not associated with a print brand): Flipboard for iPad