It appears social media is no longer a trend among internet users, but a convention. In a new report from Nielsen, social media behavior among Americans is tracked, demonstrating how much pull social media actually has among web surfers. According to the report, visits to social networks and blogs now account for 22.5 percent of total time spent on the internet.

Not surprisingly, Facebook currently dominates the social sphere, as 140 million Americans spent over 53 billion minutes on the site in May 2011. Blogger is named the next most visited site. Also gaining speed in the social networking scape is micro-blogging site Tumblr (so much so that TIME recently launched another account on the blog), which tripled its audience in the past year. Tumblr’s uniques increased from 4.19 million users in May 2010 to 11.87 million in May 2011.

Analysis of user demographics finds internet users from the age of 18-34 are the biggest users of social web components. Gender-wise, the largest group of users are identified as female; the most frequent users also make less than $50,000 a year, reside in New England, hold at least a Bachelor’s degree and are of Asian or Pacific Islander descent.

The younger crowd isn’t the only group to digitally socialize on their phones, as Nielsen reports twice as many people over the age of 55 visited a social networking site from their phones this year, compared to 2010’s numbers.

For publishers, it looks as if e-commerce efforts are bound to pay off: 70 percent of active online social network users also shop online. 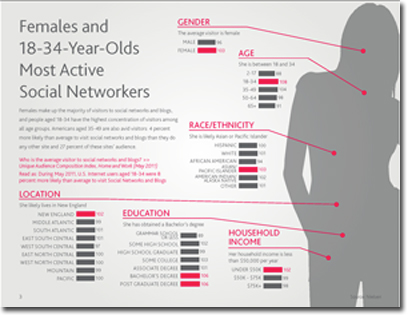