Shanker Out, Litterick In as CEO of EnsembleIQ
Jennifer Litterick becomes the B2B publisher's fourth CEO in its three-and-a-half-year history. 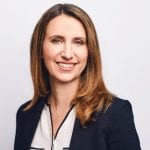 EnsembleIQ’s board of directors has appointed Jennifer Litterick as the company’s next CEO, effective immediately, marking the third leadership change at the Chicago-based B2B publisher since its formation in 2016 from the merger of three formerly separate companies.

Litterick replaces David Shanker, who joined EnsembleIQ as CEO in February 2018 after his predecessor, then-CEO Peter Hoyt, exited months earlier in a move also initiated by the board.

Created in February 2016 when private equity firm RFE Investment Partners acquired and merged a pair of legacy B2B publishers—Edgell Communications and Stagnito Business Information—the combined company was first led by former Stagnito COO Kollin Stagnito for about four months until July 2016, when RFE acquired a third B2B media company—the Path to Purchase Institute—merged it with the other two, installed Path to Purchase CEO Hoyt as its new top executive and then rebranded the entire operation as EnsembleIQ.

A company rep didn’t immediately respond to a request for comment on the circumstances surrounding the departure of Shanker, who spent much of his 18-month tenure attempting to integrate the three formerly disparate companies as well as subsequent acquisitions from Rogers Media and Lebhar-Friedman.

Longtime B2B media exec Alan Glass, who had served as EnsembleIQ’s executive chairman from the start, passed away on Friday at age 70, according to an obituary in the Philadelphia Inquirer.

Litterick first joined EnsembleIQ in February 2017 as publisher of Canadian Grocer shortly before being promoted, in November 2017, to president of the company’s Canadian division—comprised mainly of a group of publications acquired from Rogers Media a year earlier. She then took on the additional roles of president of the company’s North American retail division in October 2018 and chief commercial officer this past May.

Litterick had previously spent five and a half years with Rogers Media prior to the acquisition, as publisher of Canadian Grocer and then group publisher of it and a handful of other titles, before leaving to serve as a partner at consulting firm Pinpoint Solutions Group from 2015 to 2017.

“We are fortunate to have someone of Jennifer Litterick’s caliber and experience step up to lead EnsembleIQ,” said Mike Foster, a senior managing director at RFE Investment Partners and EnsembleIQ board member, in a press release. “We are at a pivotal moment, and during this time of transformation, there is no better person to steer EnsembleIQ into renewed growth.”