Like the economy, the health of the magazine industry is a big topic of conversation among publishers and pundits heading into 2009. One, Samir “Mr. Magazine” Husni, the University of Mississippi professor who tracks magazine launches, is vying to become the industry’s number one Kool-Aid distributor:

I am sure that we all need a touch of bloom in the midst of all the doom and gloom economic climate we are witnessing these days. So, without further due, here is some good news. The number of new magazine launches for the third quarter of 2008 exceeded that of the similar period of 2007 by 29 magazines. For the first time this year, the new magazine launches reversed the huge downturn trend that started with the third quarter of 2007 and continued throughout the first half of 2008. 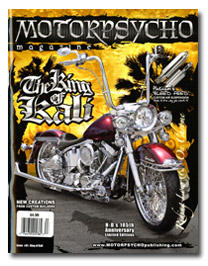 With all due respect to the publishers of Motorpsycho, if the arrival of a “magazine for those who live and breathe for the machines” is a signal of the industry’s health, we’re all, pardon me, screwed.

Still, as Dr. Husni points out, it “never fails to remind folks all the time not to write-off the launches of new magazines from the media landscape.” Every new magazine, after all, “is a new media by itself.”

So in that vein, I’d like to alert you to what the Philadephia Inquirer calls the “the sexiest dental magazine this side of the Atlantic.”

Imagine the “uncommon common sense” of Dear Abby, the no-nonsense expert opinions of Consumer Reports and the sheer star-power of People, and the synthesis would be Dear Doctor – Dentistry & Oral Health.

That’s from their press release. The “sexy” part comes via its covers, which so far have included Christie Brinkley, Jessica Simpson (Romo), Carrie Underwood and Mario Lopez. The goal of the new consumer magazine, according to the release, is “to put a shiny new veneer on a traditionally mundane subject.”

But launches, even sexy dental magazine ones, are not the cure for the industry’s ills. Like Jessica Simpson’s teeth, they may be bright spots, but, ultimately, cosmetic.