Sex Sells
Even for religious magazines. 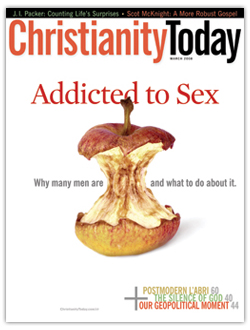 “Trying” is apparently the key word for Winslow Taft, senior art director at Mental Floss magazine, who says the cover is “very close to being great,” but not quite. His advice: “Hit the reader with the message hard and do not give them an abundance of white space to get comfortable around the image.”

But it’s not about a message, according to Christianity Today’s senior managing editor Mark Galli. “The article [it refers to] spends a lot of time showing how addictive sexual behavior is not just a moral or spiritual problem but has medical, biological and psychological dimensions.” Theologically, the apple doesn’t represent sin or sexual temptation as it does in pop culture, Galli says, but rather “temptation for man to live on his own apart from God.”

Anyway, as always, here’s your chance to chime in:

Take the Face Up survey for a chance to win an iPod Shuffle!