Seventeen Magazine Eliminating Frequency After 74 Years in Print
Starting in 2019, the teen lifestyle magazine will focus in on the growing digital-first strategy at Hearst Magazines. 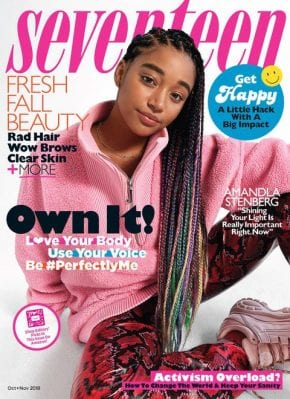 Seventeen is the latest mass-consumer magazine shifting its focus to digital-first.

Next in the long line of lifestyle and fashion magazines to adopt a digital-first strategy, Seventeen’s new model for its 74-year-old title will continue with only “special stand-alone issues pegged to news events and key moments in readers’ lives,” according to a report from WWD.

Its subscription page on its website states that “Seventeen magazine will no longer be published regularly after the December 2018/January 2019 issue.” And while the website will continue to cover all of the same content, all upcoming special issues will be available on newsstands only.

From September 2017 to September 2018, the MPA’s Brand Audience Report had Seventeen’s digital and print edition readership down 3.4 percent, its digital desktop readership down 11.7 percent, and its mobile readership down 3.7 percent, year-over-year. However, its video viewership was significantly up by 323.3 percent YOY, pointing to the fact that Gen-Z and millennial audiences are not engaging with magazine titles the same way as older generations, with their major engagement touch points being on visual platforms, like Snapchat.

Following a similar transformation that other teen-focused lifestyle and fashion brands have undergone, like Teen Vogue who went digital-only just over a year ago following “tremendous audience growth” across its digital, social and video platforms, Seventeen will be looking to capitalize on these known areas of successful engagement.

A spokesperson from Seventeen is reported to have said that “continuing the digital-first strategy introduced in 2015, our focus will be on the brand’s two-plus million unique visitors and more than 12 million followers across social media,” however, it is unclear at the moment how many staffers will be laid off as a result of the change.

With the recent appointment at Hearst Magazines of several digitally driven leaders from the Digital Media side of the company—including Troy Young as president, Kate Lewis as chief content officer, and recently Kristin Koch as the executive director of Seventeen—and the recent dismissal of the former editorial director, Michele Promaulayko, from her position at Seventeen as well as editor-in-chief of Cosmopolitan, the company has been headstrong in its mission to integrate the print and digital sides of its brands in order to operate with a digital-first mentality.

“Our teams are embracing cross-platform brand alignment, which will foster even greater idea sharing, more ambitious content creation and the development of strategic business initiatives,” Young said in a statement last month, following a major reorganization of its editorial and business-side. “We will combine editorial intuition with audience insights and data to create unique and purposeful experiences for our readers.”

As of now, the only issue listed for Seventeen’s 2019 calendar in the magazine’s media kit is a special “Prom” edition that is slated to hit newsstands on Dec. 25.