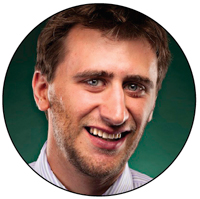 What does a young media go-getter do when the job market is as tough as it is? You start your own business.

That’s the path Sean Blanda took, after stints as assistant editor for The Philadelphia City Paper (where he oversaw the print to web process) and as an editor at Vital Business Media, covering the media industry. “I graduated in 2008 and it was a really tough market,” he says. “I wasn’t interested in starting a small town paper or working at a trade magazine, so we decided to launch TechnicallyPhilly.com.”

Blanda launched TechnicallyPhilly in 2009 with fellow Temple grads Christopher Wink and Brian James Kirk to cover the maturing Web-based creative economies in the Philadelphia region. The site publishes daily updates, profiles, reviews and listings. “We got this off the ground with free labor, writing two to three stories ourselves five days a week while we were doing other jobs,” says Blanda.

TechnicallyPhilly hit its stride in 2010, receiving a grant from the William Penn Foundation as well as requests from local businesses for consulting and custom publishing. In April 2011, TechnicallyPhilly launched Philly Tech Week, a series of events geared for both business techies and the public.

TechnicallyPhilly is also a partner with OpenDataPhilly, a portal that provides access to more than 100 municipal and non-municipal data sets, applications, and APIs related to the Philadelphia region. “To push a city notorious for lack of transparency to offer more was very important to us,” says Blanda.

Today, TechnicallyPhilly sees 50 percent of its overall revenue from consulting, 30 percent from the grant from the William Penn Foundation and the remaining 20 percent from events, job boards and advertising. Traffic remains small but niche: TechnicallyPhilly posted its best month to date with 25,000 uniques in September. “The fact that this supports three twenty-somethings comfortably and we can pay our rent means it’s profitable,” says Blanda.

TechnicallyPhilly is looking to expand. “Right now we’re selling our time and our services but that doesn’t really scale, so we’re thinking about new sites in areas such as New York or Baltimore,” says Blanda. “We may offer something else in Philadelphia or consider a membership model like the Texas Tribune. We need more passive income to make this scale.”