Saturday Evening Post Puts Its Nearly 200-Year Archive Online
The new digital archive is the result of a meticulous preservation project over 30 years in the making. 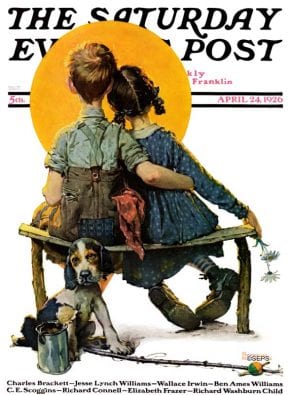 What started more than three decades ago as an effort to preserve over 300 Norman Rockwell covers, the Saturday Evening Post has finally unveiled its new digital archive, consisting of thousands of magazines that date back to its founding in 1821.

“It was a culmination of decisions that started even before there were digitization possibilities,” says the CEO of the Saturday Evening Post, Joan SerVaas, who starting in the mid-80s, while in charge of licensing and intellectual property for the Rockwell art, began the process of preservation by making transparencies for the over 3,500 magazine covers in the archive. This then led to the color-copy stage in the mid-90s, and eventually gave way to the technology of the early 2000s which allowed the 197-year-old publication to go digital.

“The decision was made initially to uncover,” says SerVaas. “I call it ‘mining our archives.’ We go in and we find all of these treasures that had long been forgotten.”

In 2009, when the now-nonprofit magazine got it’s scanner, SerVaas and her team made the decision then to keep the digital archiving process in-house, rather than sending it to a third-party to be completed in a matter of months due to the impractical costs of doing so.

“We like to keep our costs down,” she says. “So we’re out here in the Midwest and we just plug along and develop all of this overtime, slow and steady.” For 10 years, the a small staff of dedicated workers meticulously scanned every magazine in their archive, working with size constraints and human errors along the way.

SerVaas estimates that the total investment into the archival and preservation project is well into the million-dollars range, which is tied to the costs of preserving the paper, maintaining the staff, and purchasing equipment over the course of the three decades. But even with a hefty price tag, access will come free with a $15 print or digital subscription per year, which includes a membership to the Saturday Evening Post Society. 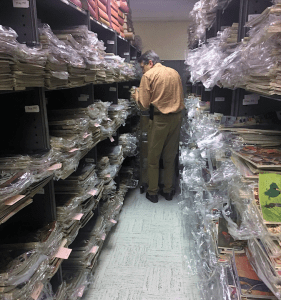 Director of Post archives Jeff Nilsson in the archives

And as the publication of a nonprofit society, there are no plans to raise this subscription fee anytime soon, but SerVaas says that “subscription revenue continues to be our biggest source [of income].” As of June 2018, the total paid subscribers for the magazine rang in at 268,000, according to the Alliance for Audited Media. But she continues that advertising and their quarterly SIPs, which are produced in a partnership with Hearst, are other significant sources of revenue.

As for the archive serving as a source of revenue, intellectual property sales tend to be the largest contributor coming from museums and writers who look to license art and articles.

The next stage for the preservation project is the taxonomy portion, which SerVaas says will allow for the ease of searching through the nearly two centuries worth of content. “You have to go in and put things in a hierarchy of searchable terms,” which she says is their biggest challenge to date.

“I always say, ‘It took 200 years to get this material compiled and published, and it might take us 10 years to get it completed in terms of what I would like to do.’ It’s been 10 years now and we’ve got everything on the webpage, but we still probably have at least two more years before I get to the point where I’m satisfied with the searching capabilities online.”