Sandow Acquires Metropolis Magazine
The 38-year-old architecture and design magazine will join Interior Design and Luxe Interiors + Design, among others, as part of Sandow's portfolio. 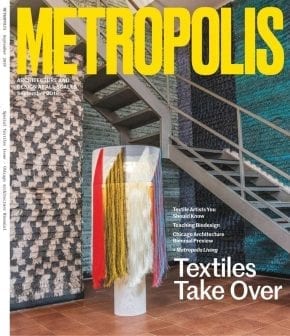 Launched by Havemeyer’s late husband, Horace Havemeyer III, in 1981, Metropolis originally focused solely on New York City, but expanded over the decades to take on a national presence, encompassing a magazine that produces nine issues per year, four additional print supplements and a series of live symposiums held in various cities around the country.

Its 51,000-circ print magazine is distributed as a membership benefit to all members of the American Society of Interior Designers, in addition to about 4,700 individual paying subscribers, according to data from the Alliance for Audited Media.

“We have always admired Metropolis‘ reputation as a thought leader and its extraordinary editorial platforms in print, online and through their events,” Sandow founder and chairman Adam Sandow tells Folio:. “Their deep understanding of design thinking and the trust they have built in the A&D community have always resonated with me.”

With the exception of some finance and operational roles deemed duplicative to functions Sandow already handles in-house, the company says that “a good majority” of the existing Metropolis staff, including editor-in-chief Avinash Rajagopal, COO Jerry Croft and advertising director Tamara Stout, will remain in their roles after the sale and move over to Sandow’s Midtown Manhattan offices, and that Sandow intends to invest in all of the brand’s platforms, including its print magazine.

“I am very pleased that Metropolis will join the Sandow portfolio,” said Eugenie Havemeyer in an announcement posted on Metropolis‘s website. “There are synergies between both brands that will help Metropolis take its legacy forward and support the future of the A&D community.”

Despite the fact that the company already publishes three other magazines geared toward segments of the architecture and design community, Adam Sandow says he sees the addition of Metropolis to its portfolio as “a natural fit,” in line with the company’s commitment to investing in media and tech that “advance the A&D industry.”

“We view Metropolis as complementary to our other design media brands, including Interior Design, Luxe Interiors + Design and Galerie. They all possess their own distinct vision and point of view,” he continues. “As it relates to Interior Design, specifically, we believe strongly that designers engage with both for different reasons. Interior Design will continue to lead in its coverage of the best projects, products and design talent globally, with new programs and technologies launching in 2020, and Metropolis will continue to be the strong voice in game-changing ideas, cultural trends, and breakthrough processes.”