Seventy-six percent of editorial directors say they have taken on more work beyond their job descriptions. As one respondent wrote, editorial directors are now asked to be “online strategist, brand manager, event producer, researcher, fixer” and deal with “employee absorption.” In the midst of all this, these editors are fighting to maintain high standards. “No one cares about quality anymore, just the bottom line—discouraging,” wrote one. Frustrations range from “meddling by publisher/executive management” to “a mandate to place advertising first.”

E-media is affecting these feelings as well. “I’m evaluated as much on clicks as on editorial quality and maybe even more so!” wrote one respondent. “The Internet (blogs, MySpace, etc.) has a lot of the younger generation believing they’re writers, but they lack real world newsroom experience,” wrote another, while one cited “educating old schoolers about the importance of digital media” as a most rewarding aspect of the job.

Fifty-six percent of editorial directors expect an increase in salary this year, and for many this is due to online. “I’m doing more and busting out of my traditional comfort zone. I expect to get more for that and won’t rest until I do,” wrote one. Others are less optimistic: “Move to online, less ad budgets for print, more work and same or less pay!”

The gap in mean salaries among female and male editorial directors narrowed from $20,000 to $12,200 this year, as the gap between those outside the New York City closed from $32,000 to $18,800. Overall, though, 8 percent of editorial directors expect a decrease in salary this year—more than any other category of editors surveyed and up from 3 percent last year. Fifty-six percent expect an increase, as opposed to 74 percent last year.

Compensation aside, 66 percent say they are highly satisfied with their jobs, while only 2 percent say they are not satisfied at all. Freedom, creative environment, intellectual stimulation and interaction with interesting people were some of the most cited rewarding aspects. One wrote, “My magazine has been enthusiastically embraced by the industry and I’m treated like a rock star!” 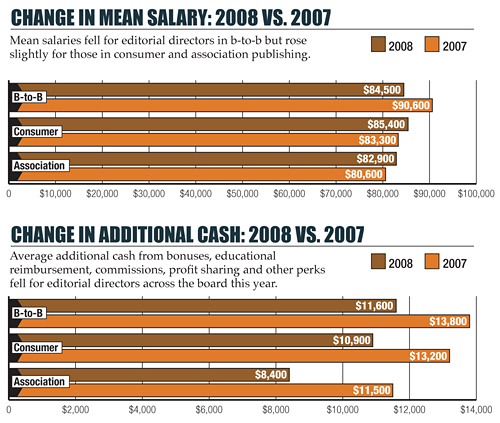