EDITOR/EXECUTIVE EDITOR
Seventy percent of editorial directors expect an increase in total compensation this year, more than any other category surveyed, but many are finding it hard to stay motivated.

Without a doubt, it is a challenging time for the industry, though some seem to be feeling the heat more than others. One respondent cited, as biggest challenges of the job, “Dealing with top management who are incredibly cheap. Dealing with turf wars with our online edit staff. Retaining and motivating staffers with no hope of ever getting more than a 3-4 percent raise no matter what they do, including promotions. Trying to stay positive when dealing with my staff and keep them from losing heart about how little the head honchos care.”

This animosity towards upper management is not uncommon. “They want more, but won’t pay for it,” wrote one respondent. “They have no clue what it’s like in the trenches.” Others are stressed about implementing new technologies: “It feels like we’re redesigning the car while driving 70 mph.”

But despite these complaints, 68 percent of executive editors surveyed say they are highly satisfied with their jobs, aside from compensation. “I love the actual edit function of my job,” one wrote. As most rewarding aspects, one wrote, “Giving voice to a community,” while others cited “developing younger staff,” “working with great writers, editors and designers,” and “reinventing journalism on the Web, mentoring the first group of Web journalists.”

Overall, 70 percent expect an increase in total compensation this year, the highest of all categories surveyed. Twenty-six percent expect no change, while 3 percent expect a decrease. Some see e-media as an opportunity for more money: “If we can develop a profitable Web site, salaries should go up.” Others see it as a drain: “Emphasis on Web initiatives consumes any spare cash. Even as gross revenues rise, salaries remain constant.” 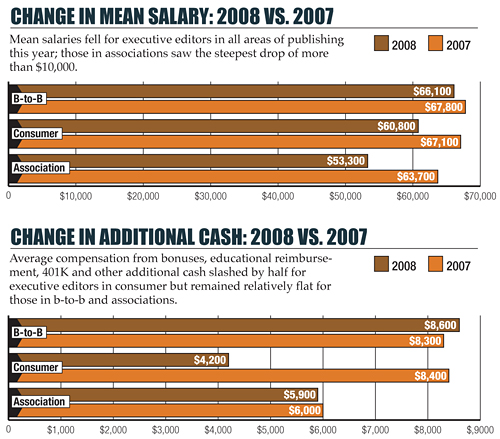