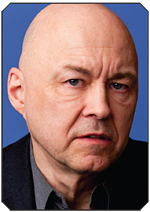 Newman was brought on board with the formidable task of shattering RD’s stereotypical ‘grandmother’s magazine’ image to recast it as a magazine for the 21st century.

With the explosion of tablet magazine development, art and creative directors across the industry suddenly found themselves with another platform to design for. Robert Newman, who was brought on fulltime at Reader’s Digest last year, is no exception. But in Newman’s case, his design work for the tablet has found its way back to the print magazine as well, creating a unique design loop through the brand.

“The main reason they brought me in was to launch their iPad edition, which happened pretty directly after I got there,” says Newman, who has also designed for Fortune, Real Simple, New York, Vibe and Details.

Not long after its iPad launch, RD launched a Kindle Fire version, which, Newman says, does require a slightly different design consideration. “The iPad is state-of-the-art tablet design. It’s hyper-interactive and has lots of rich media. It has a very interactive audience and it’s an audience that wants and demands a rich multimedia experience. The Kindle Fire is essentially a reader that allows for some interactivity and video. The user experience is a lot different. We definitely have to strip it down.”

Digital subscriptions are closing in on 100,000, says Newman and the next goal for the brand is to beat newsstand sales with digital subscriptions and single copy sales. Yet, most interesting for Newman is the way his design work for the tablet has boomeranged back to the print edition. “We liked the way the stories were coming out because they were very reader friendly and engaging and we realized we should be taking these lessons back to the magazine,” he says.

Now, the print edition features many of the same points of entry and story engagement mechanics that the digital versions have. And the cover panel graphic device used on the tablet version has also found its way onto the print version’s cover.

VITAL STATS: Newman’s design work for the Reader’s Digest tablet magazine has helped it approach 100,000 subscriptions, and the design work has influenced the print edition as well.