Riding The Next Wave of Social Media
Building multifaceted strategies to captivate audiences, keep them coming back.

For the last several years, publishers have worked to grow robust social media audiences. As the wave of fans and followers continues to swell, so too does the need to go beyond mere numbers

From Facebook and Instagram to Snapchat, three brands-Glamour, National Geographic, and Seventeen-are building multifaceted strategies to captivate audiences and keep them coming back for more. In all cases, brands are looking to drive more engagement.

Here, each brand shares the dos and don’ts of some of the most well established and quickly growing social platforms.

Designing and Executing Discussions on Facebook
For the past 75 years, Condé Nast’s Glamour has been engaging women through the glossy pages of a magazine. Nowadays, the brand carries itself across platforms to engage existing and new audiences.

Facebook is a key part of the title’s social strategy, and people like Mike Hofman, the brand’s executive digital director, understand that Glamour must go beyond the "like" to create a meaningful conversation with the magazine’s more than 3.7 million Facebook fans. And that conversation needs to happen every day.

"Today on the Web and through social media in particular, we’re able to create an intimate, personal, and almost causal daily relationship with readers," says Hofman. "And, it’s not just us publishing information for them to consume-there can be a conversation back and forth." 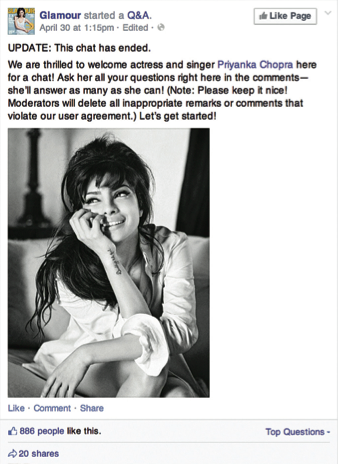 Glamour‘s social team, which is lead by Lindy Segal, has been cultivating conversations on Facebook by introducing things like Facebook chats. The brand will arrange to have a celebrity or other notable personality take over the magazine’s Facebook page and speak directly with readers. In this way, Glamour is providing its social audience with a unique offering, while also establishing an authentic dialogue

"It has become this really interesting moment for us," says Hofman. "Celebrities love doing it because they like to have direct access and a connection to users. Users love it because it’s an opportunity for them, in a very unfiltered way, to ask questions to someone they’re really interested in."

A recent 1-hour chat on April 30 with musician and actress Priyanka Chopra generated dozens of shares, over 800 likes, and more than 1,200 comments. Glamour publicizes these chats on their website and other social platforms in order to create an increased dialogue.

In addition to hosting celebrities, Glamour‘s Facebook page will also cultivate service oriented chats with makeup artists and fashion designers. In those instances, Hofman says that users ask style questions in real time ahead of their trip to the mall or the hair salon.

"When you think about reader engagement and what kinds of things a brand can do through social media to create loyalty with readers, the Facebook chats are so spot on," says Hofman. "We think they’re a really powerful way of nurturing our audience and serving them, and giving them the information they want, when they want it."

Social media is built into many of the advertising campaigns offered by Glamour, and Facebook plays a key role when it comes to providing revenue-generating partners high-quality audience access. Glamour will offer up advertising partners the opportunity to directly engage with the brand’s social audience through Facebook chats.

"We have a number of posts that are earmarked for sponsorship," says Hofman. "We have a system that works within a quota so there aren’t too many sponsored messages drowning out the editorial messages that we put through social media. I think we’re able to strike a balance that’s healthy for the reader and serves our client’s needs as well."

Reinventing Conversations and Content
National Geographic magazine is known for high-quality photography, which makes Instagram a natural place to not only showcase the brand’s plethora of visual content, but a place for custom interaction as well. 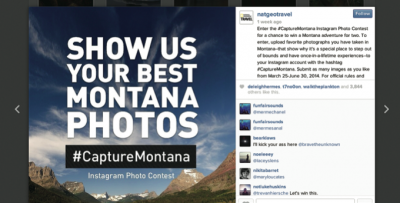 As a brand, National Geographic has more than 5.2 million Instagram followers, but it’s not just the Society’s flagship publication that is drawing in amateur and professional photographers alike. The National Geographic Travel group is taking the niche interests of wanderers and explorers and pairing them with photography and social media in a way that is unexpected and refreshing.

Carolyn Fox, director of Digital Travel at the National Geographic Society, says that the Travel group started its own individual account because the team saw an opportunity to reach a different audience and use a different voice. Currently, about 51 percent of traffic to Travel. NationalGeographic.com is geared toward the site’s photography section.

"Across our different social platforms, we’ve engaged with our audience by asking them for their photos and their contributions," says Fox. "Our Instagram account has skyrocketed the last couple months and we contribute that to starting #NatGeoTravelPic."

On a weekly basis, the Travel group asks users to submit photos with that hashtag. Each week a new theme is picked to keep the campaign relevant and fresh. The brand’s photography editor will search through hashtags and curate the best user-submitted photos and host their selections online at the brand’s website.

"Those photos seem to perform incredibly well, and they also seem to have driven our audience growth," says Fox. "I see social as a place where people want to interact with us directly, and we’ve seen great success by not only asking them questions, but also showcasing curated versions of the answers that we’ve gotten."

The campaign has captured the Travel group’s Instagram audience, with 10,000 to 15,000 users submitting photos every single week. To keep users coming back for more, the group highlights one crowdsourced photo a week on their own Instagram feed, and reposts the photos on Facebook, Twitter, and Tumblr, a strategy that has also produced heightened engagement.

The Travel group is also leveraging user engagement on Instagram to increase the reach of client-sponsored campaigns.

In mid-March, the group launched a new online hub called "Where the Locals Go," which is dedicated to showcasing authentic travel experiences from locals in the know. The Montana Office of Tourism was the first to partner with National Geographic Travel on the campaign.

"We brought readers in right from the beginning when we started building the content," says Fox. "We had our photographer in the field Instagram and encourage others who were in Montana to Instagram as well."

The campaign had several other social touch points, but on Instagram, National Geographic Travel asked users to submit their photos of Montana and had the opportunity to win a trip sponsored by The Montana Office of Tourism.

"There’s a lot of ways to use social now to make partner projects even better, and I think that’s one thing the Travel team has been doing really well," says Fox.

Engaging in the Moment
You’ve likely heard about Snapchat-the mobile app that allows users to capture videos and pictures that self destruct after a few seconds. The app has taken off among young people, so much so that Snapchat’s 23-year-old CEO recently turned down $3 billion, in cash, from Facebook.

Teens spend large parts of their days sending these self destructing selfies, and Seventeen magazine is taking notice. The brand is one of the only publishers on the market currently on Snapchat, and the publication sees the platform as a way to stay engaged and connected with its audience in real time.

"It’s a private message for the user who has friended us," says Seventeen‘s website director, Betsy Fast. "It’s a little fleeting moment that we can share with them, and that’s really how we’ve built our audience on Snapchat and how we engage with them."

Fast says the brand noticed that the social platform was taking off with younger audiences and decided to start its own account. Many publishers make an effort to keep tabs on emerging social networks to determine if they’re worth adopting as another way to reach an even wider audience.

Once a user follows Seventeen on Snapchat, they get a self-destructing photo within a few minutes thanking them for their follow. 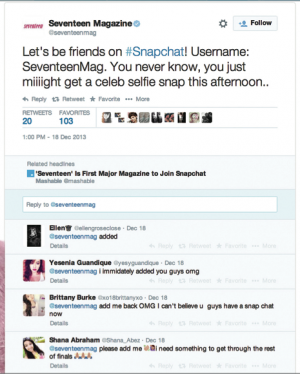 "We want to be where are girls are, but we also want to make sure we have the bandwidth to do each of the platforms justice," says Fast. "It’s not necessarily a platform for everyone, but users actually love it."

For example, when a celebrity stops by Seventeen for an interview or a photo shoot, editors capture a quick photo or short video and blast it out to the brand’s Snapchat audience. These pseudo private messages can help boost engagement with the brand because often times they serve as a way to tease upcoming content. In many instances, users will take a screenshot of the photo Seventeen sent them and share it out again on Twitter, Facebook, or Instagram-broadcasting that same content tease to a wider audience.

"It’s very in the moment-we can schedule a tweet that we know we want to go out next week, but that’s not necessarily how Snapchat works," says Fast. "When someone is coming in to the office for potential inclusion in a print story, we’re there getting some great photos to Instagram later, but we’re also getting a Snapchat. We’re Seventeen everywhere-on the beach with our June/July print issue, or on your phone with a Snapchat."