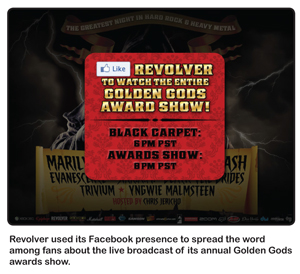 Revolver, a NewBay Media title, held its fourth annual Golden Gods event this spring. The awards ceremony honoring the best in alternative rock, heavy metal, athletics and more took place on April 11th in Los Angeles. The three past shows were taped then broadcasted a month later through a variety of channels (VH1 Classics ran it one year; MTV2 another). However, it was decided the 2012 show was going to be a live affair.

“We partnered with Xbox to broadcast the event live on Xbox LIVE and on their Facebook. Though we were in partnership with them, and this was our show, we had to come up with a campaign to push our viewers onto the Xbox Facebook page, or get them to watch it through Xbox LIVE,” explains Crystal Hudson, consumer marketing director with NewBay. “We had to figure out how we were going to let our fans know about the show, and that became the basis for this campaign.”

Hudson and the rest of the Revolver team (including marketing, editorial and the Golden Gods production group) began to generate buzz for the show early on. Voting for the award winners began in February on Revolver’s website, with a press release promoting the show dropping in March. Banner ads detailing the show and how to access it ran the month before the Golden Gods event transpired.

The hype culminated the week before the show, with a leaderboard countdown on Revolver.com, in addition to promotion on sister site GuitarWorld.com.

“We also did a takeover on the sites to promote the link on our Facebook page. If you weren’t a friend, or didn’t like us, the Revolver Facebook landing page had the like button which opened a link to the show; if you were already a fan, we let you know when to come back for the link for the live broadcast. On the night of the show, we pushed all our fans to XBOX’s Facebook page where the live broadcast was hosted,” says Hudson.

Xbox also promoted the show through its social media channels, as well as on its website.

A Gateway to Likes

Ultimately, NewBay turned a viewing dilemma into a social media goldmine. “Revolver’s Facebook page became a gate; fans could have gone directly to Xbox, but this was a way to give our audience a trusted portal to the live broadcast,” says Hudson.

On the evening of the Golden Gods event, Revolver’s Facebook page saw 45,000 new likes, equating to a 33 percent like increase on the night of the show. Revolver now counts over 175,000 likes on its Facebook page. “We’re bigger than SPIN and the Alternative Press on Facebook, which we consider to be our competition. We felt this big push brought our brand to the forefront,” says Hudson.

Beyond the link to the show, the Revolver team also used Facebook to push extra footage out to fans: Videos  from behind the scenes during the event are “continuing the conversation” with Revolver fans.

As a rule, the magazine stays away from a heavy advertising push through its social media channels; consumers are media-savvy, and are quickly turned off by obvious selling tactics. However, while there were no immediate revenue payoffs of this spike, Hudson explains the added audience is a benefit on its own.

“We use contests and sweepstakes to get them to check in with our site. We also offer unique products through our online store,” Hudson tells FOLIO:. “For example, we showed a never-before-seen Pantera video during the Golden Gods event, and then offered a collector’s edition box set on our Facebook. We’re able to capitalize on engagement that way, but we’re never going to use social media as an advertising network.”