After a stunted first half, media M&A showed some positive signs in the second half of 2009. While the number of deals that were announced during the fourth quarter was nearly identical to the number during the same period in 2008, deal values totaled $15 million—or more than double the total during that period in 2008, according to a new report from investment banker the Jordan, Edmiston Group.

Overall, 2009 saw a total of 615 media transactions (down 24 percent compared to 2008) for a combined total of $32 billion (down 11 percent). Among the 12 industry sectors tracked by JEGI, b-to-b media saw the largest increase in deal values ($417 million, up 753.4 percent), driven by a number of larger deals during the fourth quarter. Those deals included Reed Business Information’s sale of three titles to NewBay Media, Nielsen Business Media’s sale of eight of its media brands to e5 Global Media and Bloomberg’s acquisition of BusinessWeek from McGraw-Hill. The number of deals, however, decreased 9 percent.

According to the report, the best performing sector across media, information, marketing services and related technology in 2009 was mobile media and technology, which saw the number of deals announced (36) double year-over-year and deal value ($1.4 billion) grow 413.2 percent. Meanwhile, the consumer magazine sector saw the number of deals announced in 2009 (41) drop 2.4 percent and deal value ($213 million) jump 10.9 percent. 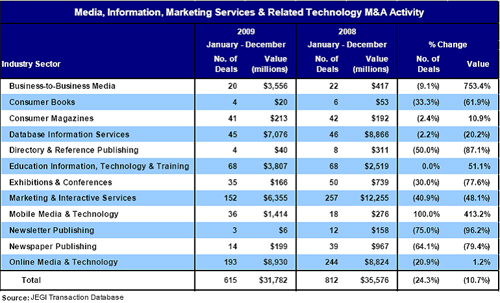