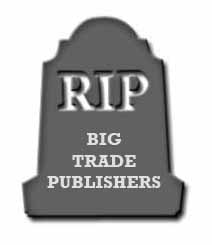 The trade media business, such as it was, has been ripped apart and largely destroyed by Google. The musical chairs game that private equity players have been playing is finally out of seats and many household names have been left holding the bag, trying to hardball the banks into restructuring or just going bankrupt. The “strategic” multi-market players are shedding print assets like pounds in a sauna wearing a rubber suit.

And so, last week’s shocking closure of 23 titles by Reed merely underscores the evolution of our industry back into what it once was, and I will paraphrase Bill Ziff, who said, “It used to be that our business was run by enthusiastic eccentrics—people who worked and lived day in and day out in their markets and hardly even realized that they were running a ‘business,’ in the classical sense, at all.”

The key observation above is that most trade publishers in the Old Days were single market companies—smaller nimble companies dedicated to their niche industries. The trade conglomerates that grew in the 1980’s and 1990’s benefitted handsomely from ganging printing, fulfillment and the usual assortment of backroom operations to run  properties at a much lower cost, as well as the trend toward professionally managed trade shows which coined money for them back in  the day.

Over time, the best managers in their market were given additional responsibilities managing other markets or being switched to other divisions a-la Jack Welch’s GE. The best salespeople became publishers. Then group publishers and VPs. They were promoted away from their markets, from their customers, from their street-level expertise.

This happened again and again at Reed, Advanstar, Penton, VNU, Cygnus, Miller Freeman and at their various successor companies. Eventually, the “professional managers” of various market segments became less and less embedded in their industries, spending their days in budget and forecast meetings and battling other execs in different markets for investment and acquisition dollars.

I know the feeling. A lifelong computer and electronics industry publisher, for a time I found myself managing all sorts of alien market groups. I remember the acute embarrassment I felt at being paraded around as a high level executive at the key trade shows for these different markets when I barely had a clue what was going on in these customers’ businesses.

Of course, this alienation and lack of understanding of markets didn’t kill the business—Google and paid search killed it as identified by IDG’s Pat Kenealy six years ago. But now that b-to-b publishing is in tatters, a post-apocalyptic vision comes into view: small, nimble, single-market-focused companies, run by people who have labored in their markets for years, getting to know the vendors, the readers, the nuances and intricacies that can allow them to be successful, despite Google.

By shuttering 23 publications, Reed has left the door open for more than a few groups of dedicated market experts to re-colonize and emerge as the trade media companies of the future.