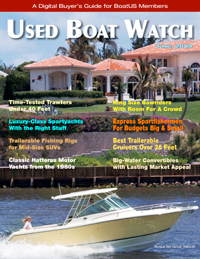 That leaves after-market suppliers as the only viable advertisers right now. To that end, McKnew and his team have launched Used Boat Watch, a bi-monthly digital edition on the Blue Toad platform that draws advertising from both sale listings and suppliers. “It’s not easy and we’re getting a lot more ‘No’s than ‘Yes’s,” says McKnew. “But we’re getting interest because it’s something different. We’ve heard over and over that suppliers who wanted to advertise online up to now had to use banners or tower ads. This is something different.”

McKnew says he needed a significant audience to draw advertisers and partnered with BoatU.S., the official publication of the Boat Owners Association, for access to its enormous e-mail list. “They’ve got a mailing list of 350,000 people and because of that strong list, we got readership of 40,000 right off the bat,” says McKnew. “Our second issue that came out is 50,000.”

Used Boat Watch splits revenue with BoatU.S. At first, McKnew wasn’t sure how to price advertising in the digital edition, which features 100 pages. “The only thing I had heard about digital editions was you can get about 10 percent of what you can charge in print,” he adds. “But really, there are no set rates for magazines these days. If they say $12,000 to $15,000 on the ratecard, they’ll be glad to settle for $3,000 and take you to dinner, too. We decided we’d get $700 to $800 per page and maybe $1,000 in the future.”