Reader’s Digest Holding Co. Files for Bankruptcy for a Second Time
Company seeking to reduce $465 million in debt to $100 million. 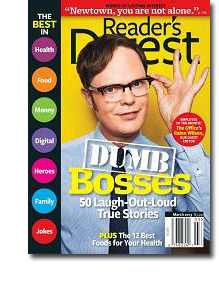 The announcement by CEO (since Sept. 2011) Robert Guth came just days before the third anniversary (Feb. 22) of RDA’s first emergence from Chapter 11.Then, under 2007-2011 CEO Mary Berner, the company had restructured its debt from  $2.2 billion to $525 million. (A casualty was much of the pensions going to retirees working under contract.)

Now, Guth is seeking to reduce the current $465 million debt to $100 million.

In both instances, these are six-month pre-packaged bankruptcies, with completion this time expected by October  2013. All operations—led by the 5.5 million circulation Reader’s Digest—are continuing.

In a statement, Guth said that RDA Holding had reached an agreement with its largest creditor, Wells Fargo, and more than 70 percent of its secured note-holders on the restructuring plan that includes the Chapter 11 filing. Upon completion, the debt-holders will most likely be given equity. Three years ago, the administrative agent was J.P. Morgan Chase Bank, and that led to Berner’s leaving in May 2011 (she is now MPA—the Association of Magazine Media president/CEO) and RDA Holding board member Guth taking over four months later from Tom Williams.

Since then, Guth’s cost-cutting has included the sales of Every Day with Rachael Ray (Oct. 2011) and AllRecipes.com (Jan. 2012) to Meredith Corp. and the Oct. 2012 closure of four year-old Taste of Home spinoff Healthy Cooking.

Further savings came from the Aug. 2012 resignation of Reader’s Digest North America president (since June 2011) Dan Lagani, with Guth assuming the title. He now says that North America is the strongest component in the worldwide company (there have been wholly owned RD editions throughout Asia, Europe and Latin America since the era of 1923 founders DeWitt and Lila Wallace).

The U.S. flagship, which primarily produces lifestyle content for women (a far cry from its excerpting articles from major periodicals for over 70 years), upgraded to monthly under editor-in-chief (since Nov. 2011) Liz Vaccariello from 10 times yearly in Jan. 2013. There has also been what Guth calls "a new vitality in the digital arena."