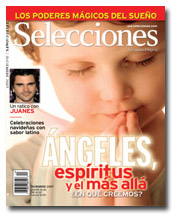 The Reader’s Digest Association has promoted Elaine Alimonti from associate publisher to publisher of Selecciones, the company’s Spanish-language magazine geared towards Hispanic families in the United States. Alimonti succeeds Elizabeth Bradley, who is leaving the magazine after six years to pursue other interests.

"The U.S. Hispanic population is currently the fastest-growing minority group in the country," said Eva Dillon, president, RD Inspiration, RDA, in a statement, "and with Elaine at the helm we look forward to strengthening our position serving this vital community."