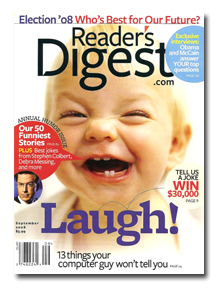 The Reader’s Digest Association reported an operating loss of $560.6 million through the first nine months of fiscal 2009, which included a non-cash $527.1 million write down during the third quarter, according to a 10-Q report RDA filed recently with the Securities and Exchange Commission. Revenues were roughly $1.65 billion, down about 8 percent.

Excluding the one-time impairment fee, as well as a $7.3 million loss
due to foreign exchange rates, RDA’s operating loss was $7.8 million,
the company said.

For the fiscal third quarter (ended March 31) RDA reported an operating loss of $535.9 million on $479.1 million in revenue, which was down nearly 17 percent from the same period in 2008. Excluding the write down, the company reported a loss of $8.8 million, roughly flat over the third quarter last year.

Earlier this year, RDA—which is owned by Ripplewood Holdings—said it would eliminate 8 percent of its overall workforce, or approximately 280 employees. The company said it expects its cost reduction plan, as well as outsourcing its IT operation to India, to produce an incremental $50 million EBITDA in the second half of fiscal 2009.

In March, RDA said it hired law firm Kirkland & Ellis and financial adviser Miller Buckfire to “explore strategic initiatives, including, but not limited to, raising additional capital and easing our debt burden," according to an RDA spokesperson.

In the financial report, RDA said some of its lending institutions
closed five of its 10 international lines of credit (outstanding
balances were paid in full). Another lender lowered the amount RDA can
borrow.