Ralph Lauren’s Web Strategy Eclipsing the Magazines it Advertises In
Son’s presentation wows magazine executives—why it should scare them. 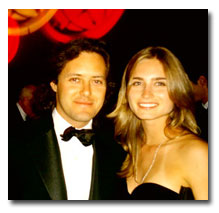 At the lunch break of the WWD Media + Style summit at the Pierre Hotel Thursday, attendees—300 or so media and fashion executives, most of them female—were still talking about the morning’s flashy opening keynote presentation by David Lauren, son of Ralph and senior vice president of advertising, marketing and corporate communications for Polo Ralph Lauren, where he oversees $200 million in global advertising and marketing campaigns for the company’s 19 brands.

Lauren—cocky, unshaven, a wild, unbrushed mane of hair, looking like he rolled out of bed in a bespoke suit—has experience in print magazines, founding the now-defunct Swing, a general interest magazine for Generation X that was distributed by Hachette. (Which is why he made a point of assuring attendees that Polo’s print ad buys aren’t going away—“Magazine advertising is something we pioneered,” he said.)

But he also has experience online, launching Polo.com, a site that boasts an average of more than 3 million unique visitors a month, a full-on digital magazine and more flash content than most magazine Web sites. The company itself has “a couple hundred” employees on the digital side. (All of which begs the question, if your brand’s Web site is so successful, why bother advertising on magazine sites, whose traffic—and expertise—you dwarf?)

Lauren also wowed the crowd with a video of curb-side store touch-screen kiosk (which Lauren said he came up with after watching Minority Report) and a demo of Ralph Lauren’s Japanese print ads, which all include a bar code that Japanese consumers scan with their cellphones to buy via access Polo.com’s e-commerce site, and even more content, using QR technology.

Lauren seemed to be here to assure executives that print isn’t going away (“Print is more important than ever,” he said. “When you have [advertisers] pull out, people get behind a leader—it gives them hope.”)

His presentation, though, should give publishers pause, too. If an advertiser is so ahead of the game online, and as print fades, why should they care about your Web site?