Putting the ‘Ad’ in iPad
What formats drive the best results? 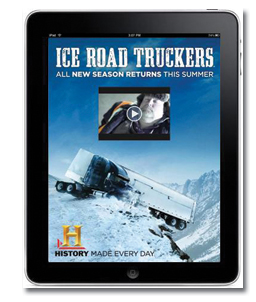 Some have referred to the current marketplace as the ‘golden age’ of online advertising, with the advent of 3G technology and the iPad craze. But the publishing industry seems to be missing out on at least part of what could be a $50 billion ad spend. Time spent with print media accounts for 12 percent of users’ consumption and 26 percent of ad dollars while Internet usage accounts for 28 percent of user consumption at just 13 percent of ad dollars, according to Morgan Stanley analyst Mary Meeker.

That’s the story at Hearst’s Popular Mechanics. Online advertising is up 46 percent over last year, outpacing print which is up 25 percent. But print represents 89 percent of the magazine’s total revenue. Most advertisers take an integrated approach of using both print and online advertising. “With any advertising—online, in print, on mobile platforms—you strive to engage the reader or user,” says publisher Bill Congdon. “If they aren’t connecting with your message, that’s a misstep and a lost opportunity.”

These days, publishers and advertisers are trying to make content and advertising available for all devices—desktops, iPhones, androids and the iPad. Advertisers want to be able to create a campaign and execute it across the widest universe of devices to get the highest possible reach of the targeted audience, says Boris Fridman, CEO of Crisp Wireless, a rich media platform provider used by Popular Mechanics. “There’s a convergence now with online and mobile as mobile devices become more sophisticated with rich media,” he adds. “The difference certainly gets blurry. Rich media is almost a must.”

The rich-media ads that ran on Popular Mechanics’ iPad issue, which was released over the summer, performed well against the goal to engage users by providing additional value, Congdon says. The interactions were not created for the sake of novelty, but rather for deeper information related to an advertiser’s message, he says.

The model the magazine used was to take the print ad as the foundation and build interactivity into the ads, based on what the marketer wanted. For example, for Inifiniti, the advertiser had multiple pictures of a vehicle for the iPad. The History Channel ran an ad with embedded video from its upcoming series, “Ice Road Truckers.” For Stanley tools, the publisher built in ‘hot spots’ that when clicked on, would provide more information.

One overriding component of the ads, which all performed well, according to Congdon, was the easy option to pull out of the interactivity. “All of the ads linked to the advertisers’ Web sites, but most importantly, we built that function so that once done browsing, the user clicks a ‘done’ button and is directed back to the ad in the application,” he says. “The application itself never closed, so there was not a chance of getting lost in cycberspace.”

The Next Big Thing

What’s quickly growing as the device of choice is the iPad. In fact, after selling a million devices of its new tablet computer in less than a month, Apple’s iPad is one of the fastest-growing new consumer computing devices ever. There are three types of advertising on the iPad: the desktop Web site ads displayed in the browser; then the iPhone-style ads and banners on applications, and there’s another advertising opportunity that is totally unique to it—interactive print, says Fridman. This new opportunity is generally the same print ad seen in a magazine, but the ad is converted to an interactive ad displayed as a page within the iPad, he explains. “The iPad is an interesting device because it opens advertising to a new type in a different fashion,” Fridman says. “This is exactly what we’re doing, delivering ads in digital magazines.”

Mobile devices have the added benefit of being able to capture a user’s location to deliver a geographically relevant ad, such as an ad for a restaurant in the area of the user. There are certainly best practices and pitfalls. Congdon says that one of the most critical elements of an online or mobile ad is its placement proximity to relevant content. “Our auto aftermarket clients—Pennzoil, Bridgestone—perform well because they are surrounded by useful auto DIY content, which is the reason the online user is in that content area,” he says.

As for pitfalls, there are several. In the early days, pop-ups quickly became the advertising ‘don’t’,  but those largely went away after the advertising community and the IAB together established some rules, Fridman says. In fact, the IAB Pop-Up Task Force found that 90 percent of users found pop-ups to be ‘annoying’ and more than 50 percent cited a ‘very negative affect’ to brands using pop-ups.

These days, concerns surround advertiser transgressions with mobile applications.
“There are things in mobile that advertisers need to care about,” Fridman says. “Mobile is a personal device, and if I see advertising that’s completely irrelevant to me, I’ll be displeased. If it interrupts what I’m doing and takes me away from that application, that’s a huge problem for me. When I get a text message, it had better not be from any promotions in my inbox. I’m not happy when that happens. But at the same time, if done right, mobile ads can be engaging and deliver value.”

PopularMechanics.com recently switched over to the Hearst Magazines Digital Media platform and got an online redesign as part of the process. Here’s a look at some of the magazine’s top online advertising performers, according to publisher Bill Congdon.

4)  Sponsorships. 100% Share of Voice of all banners in targeted sections (i.e., Combining/running at same time the Master Masthead and LREC).