To Restore Faith in Democracy, The Purple Project Calls on Magazines
Media critic Bob Garfield explains how his new venture relies on a multi-industry coalition to share stories that support civic engagement. 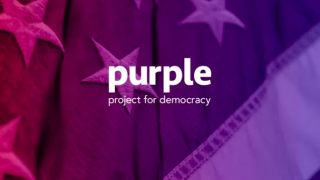 The Purple Project for Democracy, a non-partisan coalition, campaign and movement, is looking turning to magazines to help initiate a national branding campaign.

“When we started this almost 17 months ago, we saw some eye-rolling,” says Purple co-founder Bob Garfield, who is also co-host of WNYC’s “On The Media” podcast, a former contributor to Washington Post Magazine and AdAge and a columnist for Folio:. “And no wonder because it’s such a quixotic undertaking.”

But regardless of the time and effort, the mission for Garfield and his co-organizers—Rebecca Winthrop, senior fellow and director of the Center for Universal Education; Yoram Wind, Lauder Professor Emeritus and Professor of Marketing at the Wharton School; and Sterling Speirn, CEO of the National Conference on Citizenship—was simple: create the biggest media campaign ever undertaken and then change civic participation norms on a grand scale.

Responding to the growing loss of trust in democracy, which is supported by several data points that the project has been using to guide the campaign, the first phase of the Purple Project is a 30-day-long branding effort.

Taking place over the month of November, the campaign will aim to get the Purple brand and mission statement in front of every American citizen, whether that is through an editorial story in a magazine, a logo on a milk carton or messaging within a video game.

“We’re branding American democracy,” he says. “We just want citizens to get a moment to fall in love again with the things about their government that are worth loving. It’s not mindless jingoism. It’s kind of mindful patriotism and it’s disappearing and we have to do something about that—and who more than the media?” 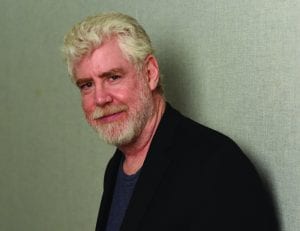 Garfield believes that in today’s media environment, it’s impossible for any single organization working to encourage civic engagement and democratic beliefs to get any traction. But by creating a coalition of partners—made up of content creators, consumer brands, institutional organizations, developmental contributors and individual project advisors—from a variety of industries that “represent the breadth of society,” the message of celebrating democratic institutions can finally reach a significant amount of people in a meaningful way.

“Our idea was to, for a 30-day period, command so much of what is a fragmented media landscape that so many people start talking about democracy,” he tells Folio:, “to actually create a brand for Purple and to create a national consciousness-raising awareness that will rekindle that spark that used to be there in all of us.”

When building out the coalition, Garfield says that magazine brands are at the top of his list for content partners because of the unique relationship that these publications have with their readers.

“You are investing a different part of your interest in a magazine for the most part and it’s quite intimate and I don’t want to lose the power of that,” he says. And while hearing about a campaign like Purple on noontime public radio may seem standard, Garfield says that seeing it pop up across different magazines has an element of surprise that he wants to capitalize on.

And it’s not just the political titles or even the general interest publications that he’s after, but he sees an opportunity for nearly every niche brand or hobbyist magazine to be involved in the conversation about celebrating democracy. And while Garfield and his team are willing to help brainstorm what story a brand like Yachting or Architectural Digest can tell to their readers, largely Purple will be hands off when it comes to the actual content creation, so long as the stories aren’t partisan or policy-based in any way.

“We maintain that everybody’s Venn diagram overlaps with democratic institutions in one way or another,” he says. “And then it’s just the process of trying to figure that out, as well as if there is an editorial way of addressing that that isn’t just propaganda, but is awareness-raising.”

Outside of media content, Garfield sees endless possibilities for where Purple can be found, including at schools and universities, in theatrical events, in music and even in your refrigerator with retail goods, which he believes has the potential or reaching even more people than some mass media outlets.

“Our goal is ubiquity. We want to reach as many people in as many places—and particularly in as many unexpected places—as we possibly can to remind them of where they live, what it means and why it’s better than most alternatives.”

At the moment, the project is monetized through a combination of donations and brand partnerships, though Garfield says that these partnerships will be limited to 10 during the initial launch phase. This is due to practical timing restrictions with the campaign being roughly four months away, and being able to provide category exclusivity as a selling point.

The other reason for capping the sponsorships, he explains, is that in its current phase, Purple’s operations don’t cost that much money. “All of the content partners are creating and distributing the content at their own expense under their ordinary business models, so we don’t have to write any large checks. Also, a lot of our vendors are doing it pro bono,” which he says has tallied up to about $500,000 worth of services so far.

It’s the next phase of the Purple Project, Garfield explains, that will require the bulk of the financial investment.

Through November, the website will serve as an informational stopping point and a clearinghouse of all of the editorial content produced from its media partners, but after that, a new platform for Purple will launch that’s aimed at providing citizens with opportunities for more civic engagement.

This step, Garfield says, is “a rigorous attempt to get citizens more engaged” in civic activities, as well as restore the “trust and devotion in the democratic system.”

On the new website, users will be able to find different activities, volunteer opportunities and information guides based on their location. Community members will also be incentivized to track their civic contributions by eventually earning a Purple badge, which will label them as an active citizen.

“That’s the ultimate goal,” he explains, “to change the standard of what is sufficient civic participation.”