Publishers Talk Vulnerabilities and Opportunities on Final Day of Folio: Show
Across all topics covered on the Folio: Show's main stage, speakers agreed that now is the time to take a chance. 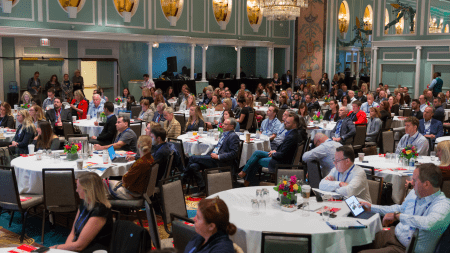 Trying something new isn’t always within the fabric of publishers, especially if they’re unsure of the results. In the final day of the 2018 Folio: Show, speakers highlighted how fighting through these moments of discomfort with a new brand, platform, or strategy can lead to more loyal readers and customers.

Back in 2005, podcasts were barely on most people’s radar. That’s when many leaders within the space took their initial steps in dominating the platform.

CaskStrength Media managing director Christina Philburn detailed her and her husband’s journey in taking such a leap, launching a podcast about whiskey. Thirteen years later, WhiskeyCast pulls in mid-six figures a year, publishing twice a week.

While this sounds like an industry-insider podcast, only 11 percent of its audience actually works in alcohol. By creating such unique and specialized content, the podcast has become the “voice in everyone’s head when they’re buying whiskey,” said Philburn.

At larger organizations, it’s possible to take advantage of the level of intimacy that podcasts provide, since it’s still a nascent market. Law.com is going through that journey now, unrolling podcasts that cater to its audience of lawyers, judges, and academics.

“When we initially started doing this, our approach was everybody just do a podcast and we will figure out,” said Leigh Jones, editor-in-chief of Law.com. “We weren’t getting what we wanted.”

Instead, Jones formalized the editorial process and decided she would co-host the podcast with director of newsroom innovation Vanessa Blum. By deciding to own it between the two hosts, they were better able to convince editors to buy in without having to rely on every editor fully becoming comfortable with the platform. And they also endear themselves to listeners who hear their voices every week.

→ Read our Day One recap here.

This same leap of faith happens almost everyday on social, where the strategies to attract eyeballs constantly change.

At Brides magazine, they’ve built one of the largest social followings in the wedding space, which is quite the achievement considering the competition in the vertical. And Lisa Gooder, executive director of the brand, says they take risks, particularly with events, like social media takeovers or expanded coverage of readers’ weddings. But by always keeping the brand’s purpose in mind, they have a guide in the creative process.

“Our brand is about authenticity, modern, inclusive [and] celebratory,” said Gooder. “Social is dedicated to these ideas.”

This feeling of constant vulnerability has long played out in the journalism space. The dynamic of an industry that is constantly looking for new revenue streams as traditional efforts slide, along with the attacks the press has received from President Trump, it could create an environment of fear. Instead, as the panel “The State and Business of Journalism” highlighted, this environment encourages stronger coverage and more dedicated storytelling.

The challenge, he continued, is whether the information provided by the media source is reliable, trustworthy, and providing of a service that benefits the community. This concern is heightened by the fact readers have grown more insular in what they read.

But it’s impossible to ignore the business side of the organization, since it plays into what’s covered. As Time writer Eliana Dockterman explained, if you want to cover a story in the middle of the country, you have to convince an editor that it’s worth the cost of travel and reporting. But with tight budgets, the ability to actually pursue such a story becomes, “inherently a business challenge,” Dockterman added.

Wemple didn’t hold back his concerns about some of the current threats to the state and business of journalism, from political to technological. But some of these business concerns aren’t self-inflicted, which transitioned into the challenge that publishers have with Facebook.

To try and provide some clarity, Christine Trodella, head of North America publisher sales at Facebook, offered advice on what works on the platform. Develop content that’s “interactive and engaging with people,” advises Trodella. “Give people a voice, and they will potentially interact.”

This is where video rears its head, as Trodella showcased Facebook Watch, the platform’s newest video venture, by highlighting how CNN launched Anderson Cooper Full Circle on the social site. It’s unique content is only provided to followers on the platform and users can partake in choosing which stories Cooper tells.

All of these efforts are meant to ignite brand loyalty—which will hopefully lead to profits—but that loyalty isn’t something that can be faked. As explained in the last panel, “Attracting and Nurturing Brand Loyalists,” finding these loyalists can leave your brand exposed to negative press, social media backlash, or angry fans. To prevent such a turn, again it requires dedication to your brand identity and purpose.

“How successful are we in giving a great experience,” said Carola Jain, head of brand at Spartan Race, describing the question she asks about her own company. If Spartan puts on a great race, helps people get into shape, and live healthier lives, then “brand loyalists will spread the word,” she added.

Without that internal understanding of the brand’s mission, influencers won’t follow since they can smell something that isn’t authentic. “Spend a lot of time on who you are and who you’re trying to impact,” says Brittany Hennessy, an author and co-founder of Carbon, an influencer platform.

With a good product, the influencers will embrace it. Then the vulnerability will become a value add.