Publishers Commemorate the 10th Anniversary of 9/11
A decade later, magazines use covers as memorials, reminders.

This Sunday will mark a decade since the September 11, 2001 attacks against the United States transpired. Many publishers are marking the anniversary with cover treatments and feature stories that not only reflect on the tragedy, but share stories of its survivors. Here, FOLIO: shares how magazines are remembering 9/11, ten years later. 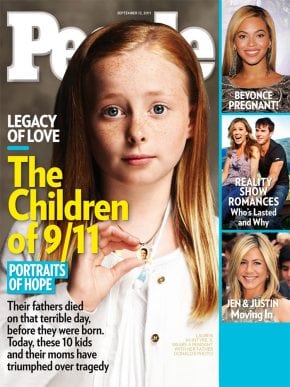 For its 9/11 tribute, People Magazine made “Legacy of Love-The Children of 9/11-Portraits of Hope” its cover story. From the cover line, “Their fathers died on that terrible day, before they were born. Today, these 10 kids and their moms have triumphed over tragedy.” 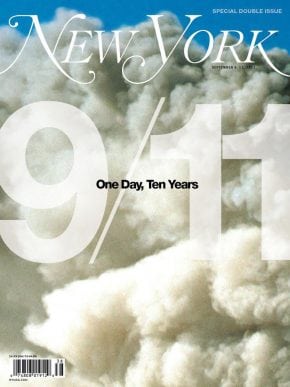 “We were determined not to make a cover of the towers but kept, inevitably, drifting back to the burning buildings — they seemed impossible to avoid.  In many of the most resonant images, the pictures were dominated by the billows of smoke.  And we got a notion — what if we took one of those images, cropped out the buildings, and left only the smoke?  And what if we cropped it toward the very top so a bit of that brilliant blue sky topped the image?  We found when we did that an interesting thing happened.

We laid out the cover on a table; passersby in the office stopped in their tracks and stared; they couldn’t stop gazing into it.  When we asked them what they saw, their answers were wildly varied.  Some saw it as an image of horrifying destruction — the incineration in its purest form.  Others saw hope – the smoke giving way to the clarity of the sky.  More than one person thought the image looked like heaven – which they found alternately creepy and peaceful.  All these reactions to a simple graphic cover of white and blue; it was sort of remarkable.  We had other, more literal alternatives that were quite powerful.  But we went with this Rorschach instead.” – Adam Moss 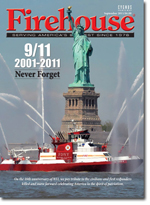 As Harvey Eisner, editorial director of Firehouse Magazine, details the process of picking the cover art for the September issue of Firehouse Magazine, he remembers what the immediate aftermath of 9/11 meant for his publication, “We had 65 interviews of firefighters that were on the scene in the first 13 issues after 9/11, and many, many pictures. In December [2010], we decided to do a tenth anniversary edition, and as well as a book that’s 276 pages long, with 95 interviews.”

For the commemorative September magazine issue, Eisner chose an image of the FDNY fireboat in front of the Statue of Liberty for the cover. Eisner says, “Most of the firefighters I know want to move on, they want to put it behind them. The tenth anniversary is very traumatic for them, the people they lost; they’re all going to have memorial services for them. Some of them would probably rather not be there, but they have to be there. So I said, let’s do something patriotic.”

While Eisner says he’s experienced some static about his cover choice, he hopes the cover will act as a hopeful bookend to a traumatic time, “Even for myself, after doing it for 10 years, let’s move on.” 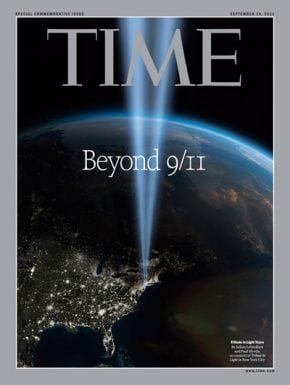 From a note to readers, written by TIME managing editor Richard Stengel, included in the 9/11 commemorative TIME issue available on newsstands Thursday, September 8:

TIME released the cover of its special commemorative issue, “Beyond 9/11”, marking the 10th anniversary of the terrorist attacks on New York and their aftermath. The front cover image is by Julian LaVerdiere and Paul Myoda, co-creators of the original Tribute in Light memorial in New York City. It shows a photo-illustration imagining the Tribute in Light as seen from space.   The cover also features a silver border—only the third cover in TIME’s 88-year history without the trademark red border. Ten years ago, in the days following the September 11 attacks, TIME changed its border for the first time in history, to black. 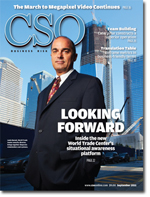 The cover story, penned by senior CSO editor Joan Goodchild, features Louis Barani, the director of security at the World Trade Center. The story includes an overview of how WTC security has changed since the attacks, as well as new security features of the revitalized World Trade Center.

Is your magazine doing a cover piece on the 10nth anniversary of 9/11? If so, send it to us.