Print Power
How The Week continues to grow print revenue (and profits) in a dotcom world. 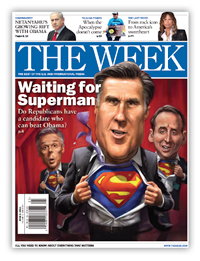 Mobile content and community brands dominated the media category of the 2011 Inc. 5000, which recognizes the 5,000 fastest-growing privately-held companies in the U.S. (The number one company in the media category: GoLive! Mobile, which “creates and packages content, including videos, games, and social media, for consumers to access on their mobile phones”, as well as offers consulting services to companies that want to create their own mobile content.)

But “traditional” publishers made the list as well, including two Felix Dennis-owned publications: Mental Floss, ranked #50 in the media category with three-year revenue growth of 52 percent to $3.1 million in 2010, and The Week at #51 in media with three-year growth of 49 percent to $38.4 million in 2010. Unlike many of the other publishers on the list, The Week continues to flourish as a print enterprise.

Here, president Steve Kotok talks to FOLIO: about how The Week continues to boost print revenue and profit, why readers are the brand’s best way of gaining new subscribers and why The Week is waiting until 2012 to finally jump into the app race.

FOLIO: The Week recently made the Inc. 5000 as one of fastest growing media brands. Where is the growth coming from?

On the ad side, it’s going from selling print ad pages to engaging with these larger brands. The number of ad packages we’ve sold at $500,00 or more since 2008 went from one to three to 10, this year it should be 15. The vast majority are combining print, digital, and events. We wouldn’t say, ‘Oh, it’s coming from print ads or digital ads.’ It’s coming from our ability to offer larger packages to the advertising brands and serve them if they want to make a splash in D.C., to serve them digitally, to serve them in multiple ways.

FOLIO: Are packages coming from existing advertisers or new advertisers?

Kotok: It’s a combination. Every year you start new, some are existing advertisers, a lot of them are new…it’s definitely breaking a lot of new business but that’s not really a distinguishing factor. Every year we make our best shot at them.

FOLIO: Please talk about current revenue ratios (print versus digital versus other channels). What is it today and how has that changed in recent years? What does it need to be going forward?

Kotok: Subscriptions and print advertising are more or less equal with Web ads being 15 to 18 percent of the revenue generated by print ads. However, print and Web ads combined exceed subscription revenue.

FOLIO: Do you see that changing going forward?

Kotok: I don’t now if we will see a huge change. A few years ago we may have thought that ads were going to grow faster than subscriptions but our ability to grow subscription revenue and keep it growing has surprised us. I don’t think we’ll start doing more digital advertising than print advertising.

We’re going on the Kindle, Nook and iPad in January and that’s all circulation revenue. I don’t see the mix radically changing, although we still see our print subscriptions and our print ads growing. Web ads are growing faster but at 15 percent of print revenue, it’s not a massive shift—we may go 80/20, 75/25, print to digital in the future. We have a good business. We’re aware of the trends. Even before digital, there were trends to follow. We’re not embarrassed of print.

FOLIO: What’s the role of the print magazine versus the other channels? How do advertising and circulation revenue compare?

Kotok: We’re approaching the magazine as profitable in and of itself. We’re not trying to replace lost subscribers or lost ad revenue, our ad revenue is still up year-over-year for the last five years, as is subscription revenue and circulation. Some of that print revenue is up due to digital, but the role of print has been reader-first. In third-party reader studies, people says they’ve read the last four issues of The Week at double the rate of some competitive magazines. The number one source of new subscribers is gifted subscriptions.

I see digital growing over the next five years so we have a digital business that can stand on its own in case something happens with print down the road. We see print being more profitable next year than this year and every print revenue stream is growing. It’s not something we’re covering up for.

FOLIO: At a time when many magazines are cutting rate base, The Week raised it again in 2011. Please talk about audience growth for The Week. How do newsstand and subscription readers compare? How do the print and digital readers compare?

Kotok: Newsstand is not a big focus for us. For most magazines of our category, less than 5 percent of readers come from the newsstand, and we’re even less than that. At The Week, we’re trying to create converts rather than something you’re trying to buy as a distraction on an airplane. Our focus is on subscription. Our secret weapon is the fact that we don’t have to spend much to acquire subscribers because our readers are so evangelistic about it. We look at how are we treating our readers—are we sending them too much stuff, are we providing them with a premium experience whether it’s from customer service or things we mail them or how they receive their first issue.

That’s our golden goose and we’re very sensitive to preserving that. If people see us as just another magazine, we won’t have that. We’re putting a lot of focus now into those evangelistic efforts—they buy gift subs for their friends, they send samples to friends, they give insert cards to their friends. We feel a huge onus to do more focus groups and surveys looking at what we’re sending. If these people are our golden goose, are we treating them as the golden goose?

FOLIO: How much staff is devoted to circulation and audience development?

Kotok: Generally, when we look at other competitive titles, our circulation staff is much smaller. Newsweek and The Economist each have 12 or 13 people and we have three. We just run smaller teams—fewer circ people, fewer ad people, fewer edit people—yet we have the most loved edit as measured by engagement.

FOLIO: Last year, you said digital accounted for one-third of the profits for The Week and you expected 50 percent digital growth in 2011. Is that still on track? Where are you focused for digital growth?

Kotok: Digital is still on track on a revenue basis—we grew digital by 50 percent. We’re investing more on the digital side and print profit grew faster than we expected, so digital is probably not one-third of profits anymore.

FOLIO: Who is your competition online?

Kotok: It’s a different competitive set online. There are certainly some titles that aren’t in print such as Slate.com, which is a great site on both the edit and business side. But the nice thing is it’s less competitive online. We never felt that competitive in print—we felt readers would love The New Yorker and The Economist and we’re pro-other great writing. Online, with a link economy, we’re not just referencing those sources but linking and driving traffic to these quote-unquote competitors.

FOLIO: Please talk about The Week’s approach to apps—you seem to be moving more cautiously than other publishers. What role will apps play for the brand in the future?

Kotok: We’re looking for simpler, more elegant, reader-driven solutions. There was huge pressure—no question there would be a lot of ad money with an iPad launch but we don’t manage our business that way. We didn’t feel the pressure to join the gold rush.

The iPad is still seen so much as an advertising opportunity, but we see this the same way as the website getting people who aren’t print people. If we can provide them with a great experience and a paid experience, if we can develop an audience of however many tens or hundreds of thousands of people paying us each week and each year, that’s much more of what we’re interested in. If we engage them there and in other media, the advertisers will want to come.